Zambia – By the young, for the young: advocates for the developing world 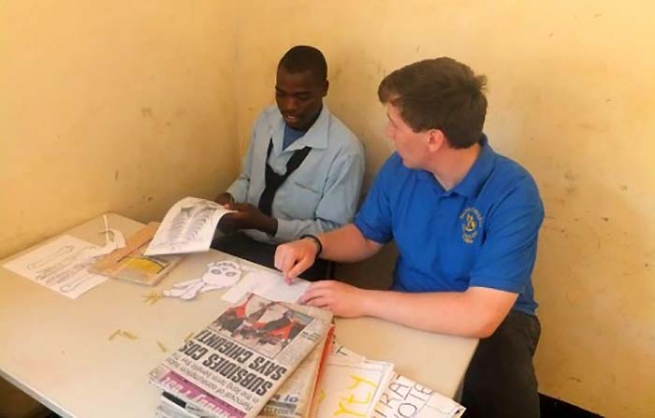 (ANS – Lusaka) – "Share the Light" is a charity created from the projects and links developed by the staff and students of Salesian College Farnborough with young people in Zambia. One of its key objectives is to develop young people who are articulate, informed and personally engaged 'advocates' for the developing world. This dates back to the first trip from Salesian College Farnborough to Mazabuka in 2012, and since then, the advocate programme has been a central part of the work carried out by "Share the Light". As in any relationship, the benefits are two-way and the ‘advocates’ outlooks on the world are often shaped by their experiences in Zambia. Scott visited Mazabuka in 2014, and sums up the contrast between his expectations and the reality.

“It is safe to say I had a fairly naïve approach to volunteering. In my mind, I was this amazing individual, heading out to another country to help others less fortunate than myself. Unsurprisingly, I was significantly mistaken. The idea that I was helping people with less than myself quickly got turned upside down – the reality was that the girls in the City of Joy were full of happiness and had an incredible appreciation of life. Call it youthful ignorance, but it just didn’t add up in my head.

I realised that no matter the difficult pasts they might have had, or the material provisions they lacked, in the City of Joy all the girls had a caring family and home. This family cohesion and their shared faith meant the girls actually had something of incredible value in their lives. My privileged background meant that I took the value of family for granted and unfortunately didn’t see it as a source of joy in the way the girls did. With this realisation, my perspective as an advocate significantly changed. My role as a volunteer and advocate was not to go out there and give anything specific, but rather to help maintain and support the amazing project already present in the City of Joy.

In reality, I left not having given to those who I had assumed had less than me, but having received so much. I gained a taste of a purer joy than any I had previously known. The experience proved to me that happiness does not depend on what you have, and the memories I’ve retained of the girls joyfully singing every day are evidence of this. It is this gift that I received, and witnessing the girl’s passion for education that has motivated me to strive for young people around the world to receive the opportunities we can sometimes take for granted."

Following his experience in Zambia, Scott has gone on to volunteer in South Africa, working in an orphanage to provide pastoral and educational support. Other advocates have been inspired to pursue careers in areas such as education and medicine. Seb, the first advocate trustee, has even made the permanent move to Zambia.