Madagascar - "The Lord won't allow Himself to be beaten in generosity!" The missionary testimony of Fr Corselli 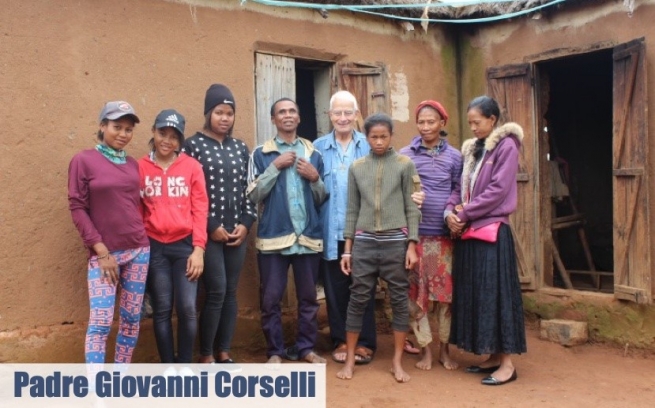 (ANS - Antananarivo) - "In my life everything has happened always by chance: I did not intend to become a priest, nor to make myself a Salesian," says Fr Giovanni Corselli, SDB. Born in Catania, Italy, in 1943, he had not even planned to leave as a missionary: "If there really is a need, I can go," were the words that escaped him during a Provincial Chapter, when he was already 37 years old. Yet today, after 36 years in Madagascar, he thanks God for all the "surprises" of his life.

If today Fr Corselli is a spiritual Son of Don Bosco he owes it to a Salesian who 65 years ago, literally stepped on his mother's feet while they were en route on a bus. That small incident was the occasion that allowed the mother of little Giovanni to learn about the possibility of enrolling her son at the Salesian institute of Pedara.

Of an already determined character, despite being only 10 years old, Giovanni initially refused: he did not want to go to school with priests! But as soon as he visited the institute, the smile of the first Salesian he met and the possibility of playing in the playground made him change his mind.

So much so that five years later he convinced his parents: "Now I want to do with the other young people what the Salesians have done with me."

After the years of Salesian formation and the first assignments with the young and the needy, it was the year 1980, the year in which the Salesian Congregation launched the Africa Project. His Province was undecided whether to participate, but Fr Corselli was one of the most determined in urging others to participate: an appeal, a summons, had come and had to be answered; moreover, the mission could have given rise to new vocations; and above all, he had a certainty: "The Lord cannot be beaten in generosity!"

So, without giving too much weight to the words, he let slip that phrase that would have marked the course of his life forever: "If there's a real need, I can go too."

Currently Fr Corselli is Master of Novices at Ambohidratrimo, a suburb near the capital, Antananarivo. "I have a discreet relationship with them and it seems to me that they love me as I do them," he says.  "I strive so that they may touch the needs of the people and their difficulties to make them aware of their lives as a service of love."

"Every day I thank the Lord for making me a Christian and Salesian, and for sending me on a mission and in Madagascar! It was a wonderful gift from the Lord!," concludes Fr Corselli.