Ecuador - Nader Torena, volunteer: "I met Jesus in my work with children and youth" 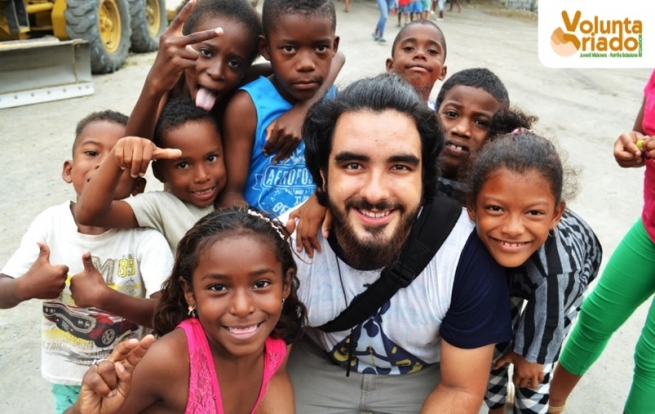 (ANS - Esmeraldas) - During his year of international volunteering in Ecuador, the young Uruguayan Nader Torena worked as a teacher and catechist but, above all, he became a friend of the hundreds of children and young people he worked with on a daily basis in the city of Esmeraldas. There he could feel the living presence of Jesus and understand why God had sent him to that location.

In recent months the home of this young Uruguayan had been the "St Filippo Neri" community, located in one of the city's poorest districts. Here, the needs of people are easily identified at first sight, but the work of Salesians and volunteers like Nader has given hope to families towards having a better future, because they are certain their children shall be able to study and have a profession.

One of the most significant aspects of the volunteer experience, Nader points out today, as well as helping those who need it most, is to see how the mission changes the lives of those who actually do volunteer work. "The Nader who returns (home) is not the same one who departed," he says.

Every day, as a volunteer, he could see the passion that the children feel for soccer, but at the same time also the side effects of competitiveness: bickering, enmity, frustration between the teams. "I was surprised to see that they did not play for the sake of playing, but to win and they would get angry when they lost; but it was the only reality they knew."

It was then that he discovered that in this sport there was an opportunity to evangelize, first talking with the boys so that they could learn to enjoy the game itself, and then to convey to them the value of prayer, before and after each game. He believes that this change in mentality in the youngsters is one of the most significant contributions he has left. "Those are the things you do not imagine, having to do catechesis by playing football, but they really happen. I never imagined that the action of evangelizing would be such a daily routine in my service as a volunteer."

On the last day of his stay in Esmeraldas, the community prepared a surprise farewell party, in which several children came to give him a hug and they asked him not to return to his country. That simple gesture, but very symbolic at the same time, was the proof of all the love he gave and that "the whole year was spent completely for them", as he says.

What ever did he do to earn their love? He applied the teachings of the Preventive System, thus obtaining the trust of the boys without punishment, but sharing with each of them a "word in the ear."

"There are kids who seem to be screaming to ask for your love, but the way they do it is to behave badly. There are young people who need you to pray for them and others with whom it is essential that you approach and talk to them; the young man who acts badly does not need you to scold him ... He needs a hug from you," concludes Nader.

Now that he's back in Uruguay, he's planning the future. In February he will return to teaching at the "St Domenico Savio" school in Montevideo and his plans are to continue preparing and transferring all the knowledge acquired in Ecuador in his daily and professional life. He says that staying away from the community of Esmeraldas will be his impulse to give a missionary sense to each of the activities. "The daily mission I think is the most complicated."

And to young people who feel attracted to this life option, he suggests going to mission places with the fundamental commitment to love the recipients and each of the activities they will do: "….and having the highest example of Jesus, who gave his life for us, it cannot be difficult for us to love at least a little."