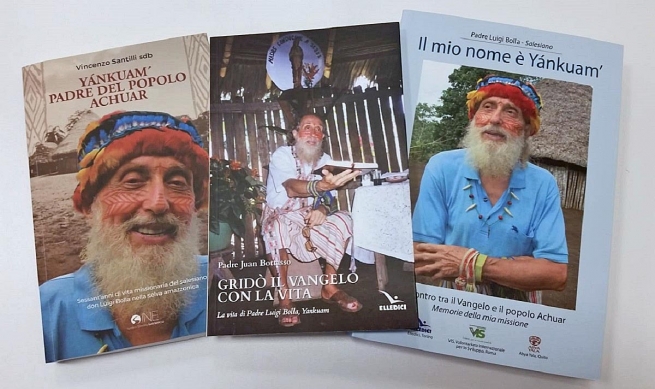 What aspects most impressed you regarding the figure of Fr Bolla, whom you knew personally?

Driven by a clear missionary motivation, enlightened by the Second Vatican Council, he showed himself to be bold by sharing the life (hard for a Westerner) of an Amazonian people: days of work in the camps of the Achuar, of which he considered himself a guest; very long walks in the forest to visit even few people; long hours spent in the meetings of tiny communities, to solve problems that we would easily dismiss as irrelevant ... But this was his way of living consecration to a people, and it allowed to open a new path of evangelization.

Could you talk to us about the books that have been written with the patronage of VIS on Fr Bolla?

He himself is the author of a volume published posthumously in Peru in Spanish in 2015, of which I curated the translation and publication: "My name is Yankuam" (Elledici, 2018, 452 pages). It is aimed at those who want to know the inhabitants of the Amazon forest, but especially the pastoral workers who want to reflect on how to bring the Gospel to the cultures that have not yet known it.

In the second volume: "He shouted the Gospel with Life" (Elledici, 2018, 100 pages) the author, Fr Juan Bottasso, highlights the profound motivations of the pastoral choice of Fr Bolla.

A third volume, published by the Salesian Province of North-East Italy (INE), has the title "Yankuam, father of the Achuar people". It is a complete biography designed for a broad readership on his figure.

Based on your contact with Fr Bolla, what can you tell us about respect for the identity of indigenous peoples?

The answer is given by Pope Francis. With this threatened Amazon, with these populations anguished before their future, especially the natives, the Pope first wanted to meet with them, in Puerto Maldonado, last January, and then he called the Pan-Amazon Synod, to make possible the birth and the development of an indigenous Church, inculturated, and with indigenous pastors to guide it. Exactly the experience lived for 40 years by Fr Bolla, which now presents itself as a providential response and as a tried and positive model to concretely indicate the way also to the Synod Fathers.

Yánkuam', a star that shines in the sky of Salesian sainthood?

As Fr Domingo Bottasso says, one of the Salesians who has lived longer alongside Yánkuam': "If he is not a saint, no one is."