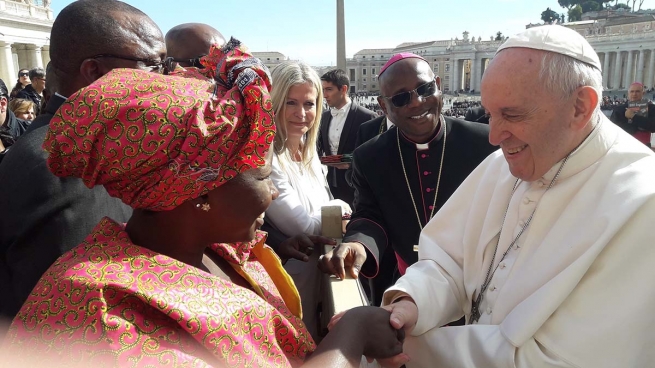 (ANS - Vatican City) - "So, does this girl cook well?", Pope Francis asked the Salesian Fr Jorge Crisafulli yesterday, in the margins of the general audience. With the human trait that distinguishes him, the Holy Father was already entering into a relationship with Augusta, the young girl from Sierra Leone forced to prostitute herself as a child, but thanks to the "Don Bosco Fambul" in Freetown she now has a small restaurant business and teaches cooking to other girls who are victims of forced prostitution. Fr Crisafulli talked about this meeting and the effectiveness of Salesian advocacy for the neediest.

Father Jorge, tell us about the meeting with the Pope.

It was the end goal of a long year passed in presenting throughout Europe, and not just the documentary "LOVE", the reality of girls, victims of prostitution in Freetown. We told him the story of Augusta: her having passed through "hell on earth", then her meeting with Don Bosco and then "salvation" obtained through education and vocational training, and the Pope was really interested in her reality because, as we know, he fights much to stem phenomena such as trafficking and exploitation. At the end, he placed a hand on the head of Augusta and blessed her, and with her all the girls who through the Salesian commitment are redeemed.

Was it worth doing this long "LOVE" presentation tour in many institutional locations and with the press?

Maybe someone may think it's a waste of time ... But after this experience I realized that the presence of Salesians and "Don Bosco Fambul" in international decision-making centers is especially important for advocacy work, because it actually protects - and effectively - the children and minors we are dedicated to.

For example, when we returned to Sierra Leone after presenting the documentary all over Europe last year, we were able to show it in Freetown, in front of many authorities ... And since the documentary also talks about those policemen who abuse their position, a week after, the Inspector General of the Police issued guidelines for the treatment of underage victims of forced prostitution, including measures such as expulsion from the Corps and an immediate trial for policemen caught having sexual relations with children and girls.

Also, "after having made all this noise", we were able to involve the President of the Republic's wife in our outreach actions, and finally on 8 February the President of the Republic declared a "National Emergency on the Sexual Abuse of Minors": so now any abused girl has the right to free medical assistance, a special body has been created in the Police to prosecute these crimes, a priority regime has been set up in the courts for cases of abuse, and the criminals who commit them they will be punished with life imprisonment!