Syria - "When our young people show their faith among their peers, they give us courage" 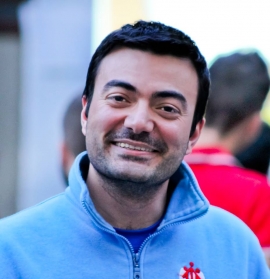 (ANS - Aleppo) – There is no more fighting in Aleppo today, but that doesn't mean the current situation is easy. Indeed, "some even say that the times of war were better," says Fr Pier Jabloyan, Director of the city's Salesian house. Scarcity of basic goods and slowness in reconstruction end up extinguishing the hopes of citizens. The Salesians, after having resisted during the war years, have not given up even now. Because they take courage from the young people themselves.

Aleppo today is a city that has 30% of its neighborhoods razed to the ground. "During the war," he continues, "they knew that bombs were falling, that there were big problems and risks for life ... But then we waited for the reconstruction phase, which we thought would start immediately. Instead, we understood that it will not happen until the political-military situation calms down."

New sanctions imposed by the United States are stopping the restart and also constitute a problem for people's daily lives. "Imagine, in a country like Syria, a gas producer, we no longer have gas, because the material used to separate the substance for domestic use has now been subjected to an embargo. People's only daily concern has become getting some gas, for cooking, heating ... ".

Furthermore, since the beginning of the year, the Salesian community has had to interrupt the delivery of aid. "Because there are no more!", says Fr Jabloyan. "First we distributed sacks of basic groceries and sometimes even cash to help people maintain themselves ... Now many people are suffering for lack of goods."

Why the Salesians continue to do what they do best: they animate the oratory, and take care of catechism. "We have almost 750 children and 50 catechists, who render a nice service to the local Church. Because I assure you that it is not easy to talk about faith in such a situation. When our young people show their faith among their peers, with play and games, testimony ... It is they who give us courage!"

The religious also accompany the various sports groups, the theatrical group and the youth associations. They take care of the formation meetings for the students of the secondary schools and of the university, and on behalf of the Episcopal Conference, they accompany the Christian prisoners.

From the theatrical project a new video animation program was born recently. Fr Jabloyan says, "During the war there was no recording studio in the city, so we worked hard to get some equipment and train young people. In the future we want to expand this project and extend training to more people. Our idea is to tell Salesian spirituality in a joyful way, but in the Arabic language, something very rare in these parts."

As for the future, he concludes, "We hope that international policies, such as the Pope's, push towards a peaceful solution, very much awaited in the Middle East."