Spain - "What other answer could be more beautiful than faithfulness in saying 'yes' to the missionary summons?" 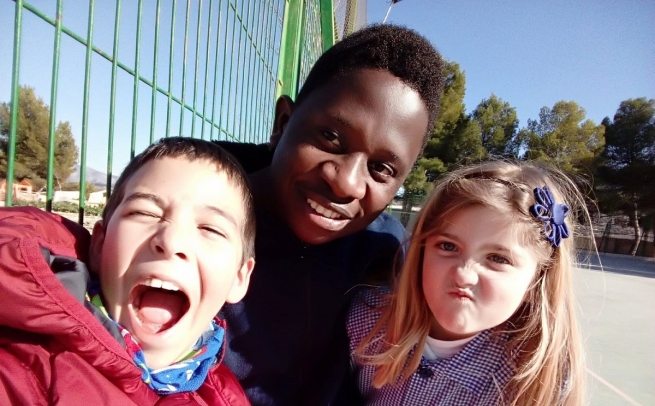 (ANS - Alcoy) - He is a native of the Democratic Republic of the Congo, just 26 years old and has yet to make perpetual vows, but already in 2017 he left as a missionary within the Project Europe, to witness his faith among young Spaniards. The challenge is not small, but he intends to live and experience it with simplicity and confidence, one step at a time. He is Norbert Mamba Kabongo and what follows is the story of his experience.

I left the Democratic Republic of the Congo on 25 August 2017 and the following 24 September I received the Missionary Cross in the Basilica of Mary Help of Christians in Turin; then on 21 December 2017, I arrived in Alicante, Spain. After spending 10 months and a few days in the Salesian community of El Campello, province of Alicante, on 29 October 2018 the Provincial sent me to the Salesian community in Alcoy, another municipality in the same province.

The Salesian house of Alcoy includes two educational institutes, a parish, a sanctuary, a youth center, the Scout movement, a Social Platform for young people in difficulty and various other groups of the Salesian Family.

The Lord continues to love the Humanity that he created and wanted. As a Salesian, I feel enveloped by this tenderness of God in a special way. This load of love demands to be "poured out" around us and requires a response of demanding fidelity.

And what other answer could be more beautiful than faithfulness in saying yes to the missionary call? This is one of our missionary motivations.

As Fr Pascual Chávez Villanueva said: "At a time when, in Europe, vocations are diminishing and the challenges of evangelization are increasing, the Salesian Congregation must be careful to strengthen the Christian proposal, the presence of the Church and the charism of Don Bosco on this continent. As Europe has been generous with the dispatch of many missionaries all over the world, so too now the whole Congregation, addressing in particular the regions rich in vocations, should be available to them."

Missionary life has many joys in store for us.

But talking about missionary life means, above all, to refer to those moments in which one moves, one comes out of oneself towards others, when one goes to meet new people. With some people it is easier, with others it is more difficult.

The important thing is to dare to meet others and to rely on God's help.