RMG - "We must be a community that discerns and accompanies." Interview with Fr Rossano Sala on the Apostolic Exhortation "Christus vivit" 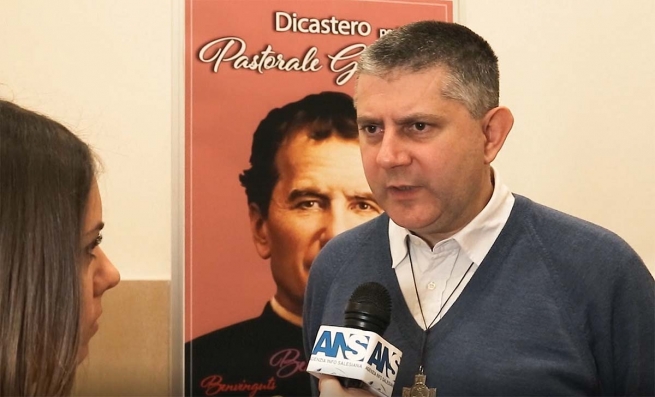 (ANS - Rome) - The Apostolic Exhortation of Pope Francis "Christus vivit" was presented today in the John Paul II Hall of the Holy See Press Office. The Exhortation, which the Holy Father signed last March 25 on the occasion of his visit to Loreto, is the fruit of the Synod of Bishops of October on the theme "Young People, Faith and Vocational Discernment". In fact, as per the synodal path, the pontifical document is in the form of a "Letter to the young". Fr Rossano Sala, who was Special Secretary of the Synod, spoke of the Apostolic Exhortation "Christus vivit".

Starting from the title of the Exhortation, "Christus vivit", how do you think Christ actually lives today among today's young people?

In the fifth chapter, Pope Francis asks himself: how is God present in history? The answer is: through young people. Through a young man who really has really met Him and brings Him into the world, takes Him to school, university, politics, social work, in serving children, in a thousand ways. Thus I would say: the presence of Christ in history passes right through the lives of young people. This is the Pope's wish.

What would, instead, Don Bosco think in reading this Apostolic Exhortation?

Meanwhile, it must be said that Don Bosco is present in the Exhortation. Pope Francis, naming a series of saints, in fact refers to Domenico Savio and his teacher Don Bosco.

Furthermore, there is a part in which the Holy Father asks the Church to return to crying when it sees the miseries of today's youth in a globalized world, in a world dominated by the culture of waste, the culture of abuse. At one point he says: "we must ask for the gift of tears". And to me, Don Bosco immediately comes to mind. What did Don Bosco do when he first left the Turin prison? He came out with tears in his eyes. Therefore Don Bosco shares the passion of Pope Francis, who not for nothing was baptized by a Salesian! And this, he too has in his DNA.

These viscera of mercy, which are moved by seeing the hardships, the marginalization, the unease of so many young people in the world.

How do you think the Apostolic Exhortation will be received by the Salesian Family of the whole world?

First of all, I'd like to reiterate that if in this Exhortation ready-made answers are sought, one will be disappointed. On the contrary, strong is the invitation to work together. We must be a community that discerns, accompanies and is ready to move.

The interview with Fr Rossano Sala is available on ANSChannel.