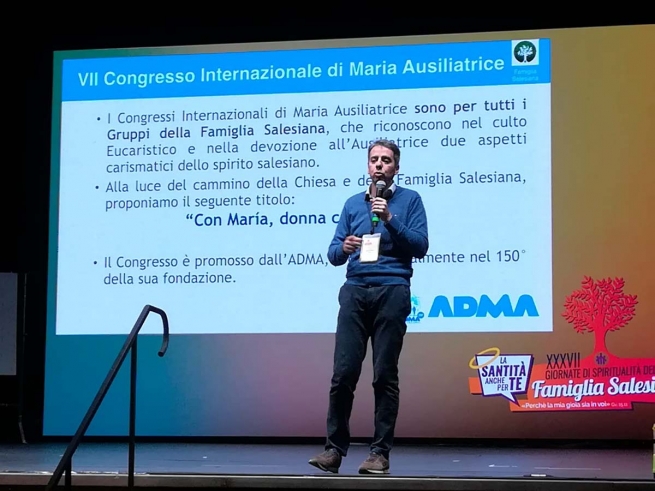 (ANS – Turin) – Don Bosco did not leave the cult of Mary Help of Christians to spontaneous devotion alone. He founded an Association that took its name from her, the ADMA. It is one of the initiatives most dear to Don Bosco. What is its current face? We talk about it with the President, Renato Valera.

Can you introduce yourself?

My name is Renato. I am 46 years old. I am of Neapolitan origin although I have lived since the age of 10 in Piossasco (Turin) where my family moved in 1984. I have been married to Barbara for 18 years. The Lord led us to meet and discover that we are really made for each other. He gave us four wonderful children - Matteo, 17, Caterina, 15, Sara, and little 5-year-old Margherita - and with this little troop we try to live everyday life, putting ourselves at the school of Mary and rediscovering the everyday joy of the Gospel. We have been members of the Association of Mary Help of Christians since 2013 and at the end of 2017, on the occasion of the renewal of the council of the association, I was appointed president of the Primary ADMA. For me this new experience is a way and an opportunity to give back some of the gifts I have received over many years of journeying and feeling a living part of the Salesian Family and of the whole Church.

Why did you join ADMA?

To say thank you! Joining the association was for me and for Barbara at the same time the culmination of one journey and the beginning of a new journey. For some time now - together with other families and accompanied by Salesian priests - we have been following a path of Christian formation, to try to live the project and the vocation that the Lord wanted for us as individuals, as spouses and as parents. This experience opened our eyes, helped us and transformed us over the years: it was a blessing! Every time we stop to pray and keep silent, we recognize how the grace of God has worked in our lives and how, day after day, even with difficulty, trials and falls, we discover a bit more of the wonderful canvas that the Lord is weaving. Being part of the association was then a way to say thanks to Mary, who entered our house silently on tiptoe. And it was the beginning of a new journey consisting of entrustment, prayer, restitution and service.

What does "Primary ADMA" mean?

ADMA – The Association of Mary Help of Christians was founded by Don Bosco one hundred and fifty years ago, on 18 April 1869! Don Bosco wanted it as a concrete way to defend the faith among simple people, promoting love for Jesus in the Eucharist and devotion to Our Lady under the title of Help of Christians. The term "Primary" is intended to recall precisely the first ADMA constituted by Don Bosco at Valdocco. It underlines the particular bond of the Association with the Basilica of Mary Help of Christians: In fact, it was just one year after the Consecration of the Shrine (1868) that Don Bosco decided, alongside the building made of bricks to erect a shrine built with "living stones."  He founded the Association because he was amazed by the countless graces and miracles that people attributed to the intercession of the Help of Christians. All the ADMA groups of the world today are "aggregated" to the Primary ADMA of Valdocco. ADMA is a simple form of belonging to the Salesian Family. "Simple" because it does not actually require particular commitments or conditions, but only the desire to try to live and promote love for Jesus in the Eucharist and devotion to Mary Help of Christians, imitating the attitude of Don Bosco - entrusting oneself to Mary, glorifying the Lord and "standing strong" in the trials and difficulties of life. "Belonging" because it creates relationships between people, families, young people, different generations, various states of life; relationships that, as Don Bosco used to say, are necessary because "being with many others who are doing good encourages us without our realizing it".

How widespread in the world is ADMA?

During these first 150 years our association has spread all over the world, thanks to the generous response of many people who, despite the difficulties and the vicissitudes of life, have continued to keep their devotion alive, relying with simplicity on the Help of Christians. Today we have more than 100,000 members in over 50 countries, with 800 local groups erected and aggregated to the Primary ADMA of Valdocco.

Plans for the future?

We will still try to entrust ourselves and trust in the Lord and simply promote devotion to Mary Help of Christians. We will try to make ourselves interpreters of the signs of our time. We know that defending the faith today means paying a lot of attention to the family, as the cradle of the human and spiritual formation of the young. We would therefore like to continue to promote evangelization in education, in families and in all spheres of life, not only by our apostolic commitment, but also through a practical testimony of life, without letting ourselves be deceived by the logic of indifference and selfishness, always in a family style, simple and practical.