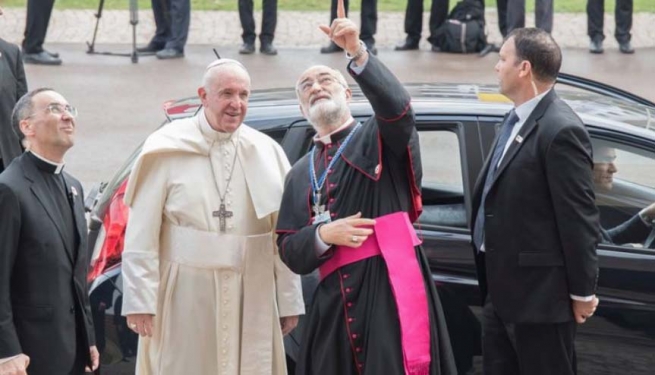 (ANS - Rabat) - Archbishop Cristóbal López of Rabat, SDB, answers some questions about the Pope's visit to Morocco. What was the importance of Pope Francis' visit to Morocco? What were the particularities of this papal journey to a predominantly Muslim country?

I believe it was a historical event, the consequences of which will be evident only with the passage of time. The journey itself is already a message, because it saw the Pope visiting a "peripheral" country according to various aspects, and for the program that was developed, with two "social" visits, two stages dedicated to interreligious dialogue and two specifically for the Christian community, in addition to the moments of protocol.

What moments did you share with the Holy Father?

As archbishop of Rabat, I was the Pope's ecclesial “host”, and for this reason I accompanied him practically at every moment of the journey. The best personal moment was when I was able to travel with him for almost an hour in the same car (just the two of us, with the driver and security personnel). I could converse with him side by side for all that time, in a very familiar and close way, and there was also the opportunity for a few quips.

Ecumenism must be a priority axis, which must support religions for a peaceful and complementary coexistence. How has the Pope shown this need in Morocco?

If by ecumenism we mean the effort and the initiatives that we Christians do to "be one", here in Morocco we live it with great intensity. The Pope personally greeted the President of the Evangelical Church in Morocco, the Anglican Reverend, the Pope of the Russian Orthodox Church and Metropolitan Meletios of the Greek Orthodox Church, who were also visiting. He also spoke very well of the Ecumenical Institute of Theology "Al Mowafaqaqa", an institute that Catholics and Protestants bring forth jointly in Rabat, dividing 50% of responsibility, personnel and costs.
But if we want to think of an ecumenism beyond Christianity, that is, of interreligious dialogue, in particular of Islamic-Christian dialogue, this visit of the Pope marks a first and an after on this topic.

Two weeks after this trip, do you think it gave the Christians of the country a boost, a stimulus?

For the small Catholic community (about 30,000 people), this visit was "an injection" of self-esteem, enthusiasm, joy, communion ... We were almost 10,000 gathered at a Mass, certainly for the first time in all of Morocco's history! And we lived a fantastic, joyful experience ... Everyone came out of the Mass with a feeling of joy and peace in the heart that could not be told.