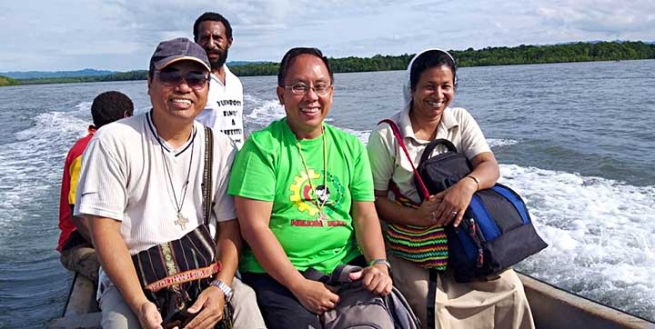 (ANS - Port Moresby) - The entire region of East-Oceania in Asia has been preparing for the formation meeting for the Salesian Cooperators of the region for some time, which will take place from 24 to 27 May in Cambodia. In view of that appointment, the Superior of the Vice Province “Papua New Guinea-Solomon Islands” talks to us about the twenty-year presence of the SSCCs in those territories.

How did the vocation of the Salesian Cooperators in the PGS Vice-province come into being?

Way back in 2000 we wanted to start in Papua New Guinea the Salesian Cooperators but were struggling to find candidates. I was rector then of Don Bosco Gabutu and I decided to invite parents who might be interested to live the spirit of Don Bosco as Salesian Cooperators. Some 15 parents came, and a parent Mr. Thomas Raivet, expressed interest. He invited me to speak about it after the Sunday Mass in his parish. Ten lay people responded, which became the first group of Cooperators who made their Promise in 2002. Other Salesian Cooperator groups followed in Kumgi (Highlands), in Kokopo (Rabaul) and in Gabutu (Port Moresby). In 2018 the first two Cooperators in Solomon Islands made their Promise in Henderson (capital of Honiara). At present there are 20 Cooperators and 10 are undergoing formation, around 6 more have expressed interest to know more about the Association.

The Vocation of the Cooperator in PGS is very much tied to our Salesian presence. All our Cooperators are those who were either parents of our students; others are our Lay Mission partners or parishioners who were, or are, so enthused by the Preventive System and the Salesian Spirit that they wanted a deeper way of sharing the work of Don Bosco.

What are the major challenges in your vocation growth?

The main challenges in PGS are the mobility of people and distance. People move a lot, because of a job or out of necessity. Since the cost of travel is very high, it is not easy for those who move from a place where they were connected to a Salesian Cooperator Center to join in their meetings or gatherings. Communication is not always efficient.

How do you prepare yourself for the accompaniment of future Salesian Cooperators?

We have very few Salesians in our Vice-Province, hence many have multiple tasks. On the other hand, we are blessed with very committed Lay Mission Partners, many of who are our past pupils. Our primary task then is to form and accompany Salesian Cooperators whom could, in turn, accompany other cooperators. Until 2018 I was personally following up the local SDB Delegates for the Cooperators. With the permission of the World Delegate for SC, Fr. Giuseppe Casti, I have appointed a Lay Mission Partner and a Cooperator as Provincial Delegate for Salesian Cooperators of PGS. I journey with her to empower her more and more to fulfill her role as Provincial Delegate.

What exchange among the EAO Salesian Cooperators do you dream about?

I dream of an exchange of experiences of Salesian Cooperators in the role of leadership with those in other provinces in EAO. Our Cooperators are new and their exposure to other best practices will certainly go a long way in strengthening our local Cooperators' center in PGS.

What do you expect from the 2019 EAO Formators Workshop in Cambodia?

How do you put in practice the four pillars of formation?

We need to integrate it in our formation modules.