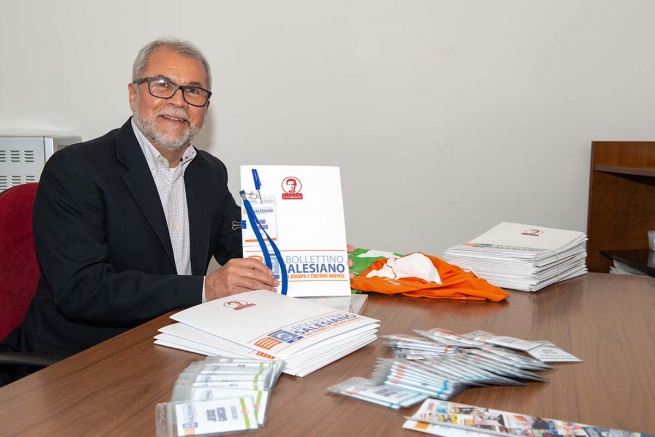 (ANS - Rome) – Fr Filiberto González, General Councilor for Social Communications, is preparing the International Meeting of the Salesian Bulletin. In an interview, he explains the activities that will take place from May 26th to 29th with the Directors of the magazine's various editions, and insists on the need to collaborate in favor of an educational force that models mentality and creates culture.

"Communicate to involve in the mission, between the Press and digital culture". Why this theme for the meeting of the directors of the Salesian Bulletin?

Because the Salesian Bulletin (SB), like all the magazines of the world, is experiencing the transition from print to the digital world. We want to make this change with great respect for our readers and also with respect for the identity of the magazine, since it was conceived in the mind and heart of its founder, Don Bosco, to narrate what the nascent Congregation was doing in Italy and abroad, in favor of evangelization and the education of the most needy young people, trying to involve the greatest number of benefactors and sympathizers in this mission.

Let's look at some numbers: how many editions, in how many languages and how many magazines is it printed each year?

I begin by saying that the printed Salesian Bulletin is present in 132 countries of the world, with 66 editions, read in 31 languages, with different editions according to the possibilities of the Provinces. We are talking about millions of paper magazines every year, the most significant being the Italian edition, with 300,000 monthly copies and more than 3 million a year. But you only asked me for the printed SB: but we also have digital SB, which greatly amplifies the number of good news readers.

Who are the speakers who will participate in this important event?

We count on the participation of experts in various fields: first of all, the Rector Major, Fr. Ángel Fernández Artime, editor of the Salesian Bulletin as Successor of Don Bosco; then Fr Francesco Motto, a well-known Salesian historian; Dr. Natasa Govekar, Director of the theological-pastoral department of the Secretary for Communication of the Holy See; the journalists Nicola Zamperini and Sandro Cristaldi; José Beltrán, Director of the magazine Vida Nueva; Esteban Lorenzo, Director of Products and Digital Communication of the Salesian publishing house Edebé. And then there will be the presentation of the good practices of the SBs of Argentina, Ethiopia, France and Portugal.

Is the Salesian Bulletin current today, both in paper and digital form?

Among the 50 participants from different countries of the world we are convinced of the importance of the SB as an institutional magazine, so we try to reaffirm its identity, its social relevance and the centrality of people, being attentive to the social, cultural and technological dynamics of the moment. In this sense we are an alternative magazine that informs, shapes and involves its readers in the educational mission of young people and popular sectors.

What would Don Bosco say to today's Salesians about the Salesian Bulletin?

First of all, I reply with the same words of Don Bosco left in writing in his letter on the spread of good books: "I pray and I beg you therefore not to neglect this very important part of our mission". And I conclude with the words of Fr Egidio Viganò, Successor of Don Bosco: "If today the break between the Gospel and culture is exacerbated by superficial, religiously uninformed and often ideological communication, it is necessary to collaborate in favor of an educational force that shapes mentality and create culture, as an authentic alternative school."