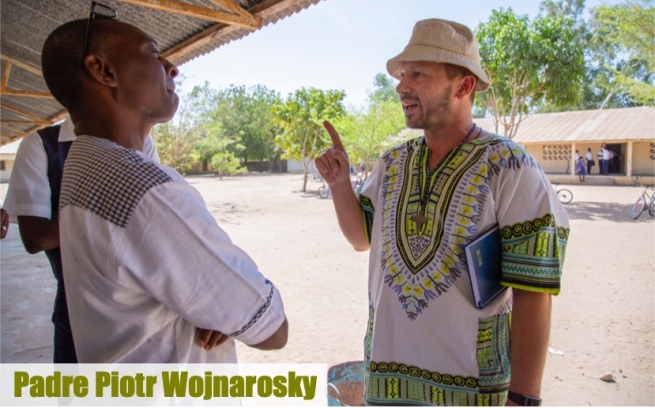 (ANS - Kunkujang) - He is one of the four Salesian pioneers in the most recent missionary outpost of the Congregation, in Kunkujang, Gambia. Yet as a boy he just wanted to play football and even as a Salesian some times passed before he felt the spark of missionary activity within. Fr Piotr Wojnarosky, a Polish Salesian, testifies today how willingness to follow God's summons can change perspectives and life.

"In Poland I attended a parish led by the Salesians. When I was in high school I wanted to become a sportsman and I played soccer as a professional," he says. "I was not very attracted by the idea of becoming a Salesian," he admits. "But when I participated in a vocational workshop, a new thought came to guide my mind: so that in the last year of high school I changed my mind."

After his studies in Philosophy, he was sent to France for his apprenticeship. Returning home to study Theology, he was ordained a priest and was assigned to a Salesian school in Silesia, where he set up a youth missionary group with which, in addition to praying for missionaries, he decided to support a project in practical terms.

"There was a Polish missionary confrere in Ghana who in 2001 invited us to build a school with him in Afienya. When I went to see him, I fell in love with Africa. On my return to Poland, I applied to leave as a missionary!" he recalls.

In 2003 he returned to Ghana with collaborators to build a school for Sunyani, and in that same year he was assigned to that mission. "I was appointed head of the Vocational Training Center, which I directed for seven years. Then I was chosen as Delegate for Youth Ministry for the English-speaking Africa West ​​Province and so I animated many activities for young people." Having also served in Tema, always in Ghana, he proposed he accompany the foundation of the Salesian presence in the Gambia.

"The local bishop," he says, "had asked the Salesians to open a new presence and our Congregation accepted by sending four confreres from four countries on four continents: Peru, Nigeria, India and Poland." The first step was to evaluate the youth situation and the context. In the mission village, Kunkujang, there are schools, from primary to high school, and there is a large church near a Marian pilgrimage site. But there is also a high rate of illegal migrants trying to reach Europe. "This is one of the facts we immediately included in our analysis," he concludes.

Now Fr Wojnarosky and his missionary colleagues are committed to launching several concrete projects to help and support the young people in need.