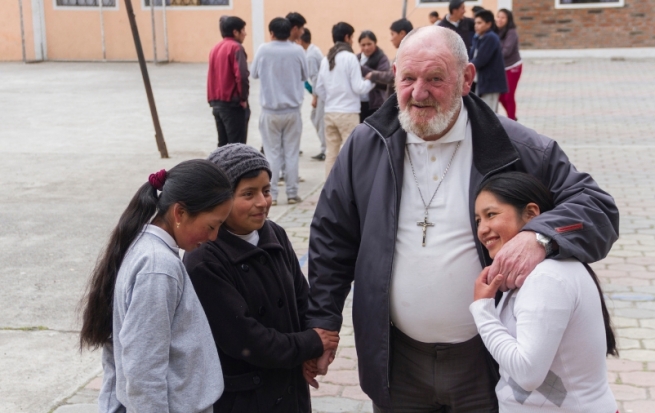 (ANS - Zumbahua) - Zumbahua is a community located more than 3,000 meters above sea level in the province of Cotopaxi. It is there that the Salesian missionary Fr Pio Baschirotto works; he has been working for more than 30 years alongside indigenous communities.

At 69, with a smile and joy on his face, he still remembers when in 1972 a group of young volunteers from the "Operation Mato Grosso" in Italy asked him to go to Ecuador, to accompany them and advise them to start a stable project in the locality indigenous to the Andes Cordillera.
From that moment on, the humility and simplicity of "Don Pio" accompany what has now become his home, even more than his place of work. "The peasants fell in love with me and I fell in love with them," he says; thus, while his gaze returns to the past, he comments that in 1973 he was in charge of the Zumbahua mission, in which he worked for three and a half years; then he moved to the province of Bolívar, in the mission of Talagua, El Guayco and, in 1979, he moved to Quito and became head of the reception center of "La Tola".

Of this phase of his life he recalls that at the time fifty peasants came to La Tola every day, migrating from their communities to the capital, until, given that the number increased, they had to get more rooms to take care of all those who arrived.

After a few years, over 450 people were welcomed each night; that is why, smiling, Fr Baschirotto says that "I invaded the Salesian College". But "Don Pio" also has many memories of another house, the "farmers' center" of Cayambe.

If there is one thing that makes this Salesian priest happy, it is having seen up close the formation of community leaders who then entered politics, as in the case of Jorge Guamán and Lourdes Tibán. Nevertheless, he clarified that community development is not entirely positive, because he ensures that, with much support from the institutions, many people in the communities want everything to be given to them, without having to do anything in return.

He also explained that unfortunately migration was the cause of negative changes in the formation of communities: unstructured families and abandoned women, these are just some of the problems that need to be addressed.

"I believe that where we are working is where the Lord has placed us and wants us," concludes Father Baschirotto, "and what should encourage us is the will to serve the most needy."