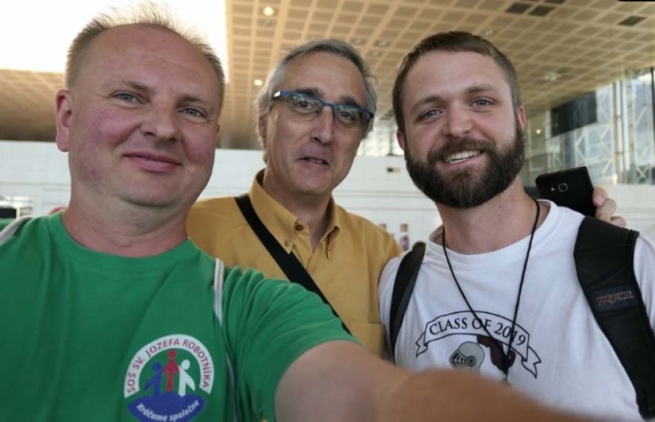 (ANS - Barcelona) - The "Artemide Zatti" House in Barcelona is the result of a long process or project, one that is now operative. The house aims to be the site of specific formation of the Salesian Coadjutors of the two European regions and is now open for business. The first Salesians to arrive shall learn Spanish and then devote two years to theological and pastoral formation at the "Don Bosco" Higher Institute of Religious Sciences in Martí-Codolar. The formation team is composed of Manuel Rupérez (of the Province with offices in Madrid - SSM) and Jordi Latorre (of the Province based in Valencia - SMX), to whom we asked a few questions.

How did the idea of ​​the Artemide Zatti House come about?

The Ratio, which is the document that regulates the formation of the Salesians of Don Bosco, speaks of a two-year period of specific theological-pastoral formation for Salesian Coadjutors; so little by little specific houses of formation were organized in different parts of the world, generally, one per region. In Europe, the two regions had a single house of formation for the Coadjutors, traditionally located in Valdocco, which, however, had to be closed a few years ago for various reasons. The General Council of the Salesians then decided to give rise to a new experience at Martí-Codolar, in Barcelona.

Who are they meant for?

For those Salesian Brothers who find themselves in the year preceding their perpetual profession; therefore they have already done their novitiate and post-novitiate and apprenticeship. Thus, before making perpetual vows, they arrive at Casa Zatti, where for two years they will study Pastoral-Theology.

How many Salesians do you expect to receive this year?

This year we start with four Salesians - Daniel Imriska (SLK), Travis Gunther (SUE), Gabriele Calabrese (ICC) and Luis Javier Barajas (SSM), who will continue for another year. In the second year we expect to receive 2 or 3 other coadjutors who will arrive to start their first year.

How many formators will accompany them?

For the moment we shall be two formators: Br Manuel Rupérez, a young Coadjutor who has already been a missionary, but who for personal reasons has had to return to Spain and who will be at least two years to accompany those in formation, and myself.

Who is responsible for this house of formation?

The Rector Major, through the Formation Department, put me in charge in the summer of 2017 to set up this formation house. It was my job to start it up, and the reason is very simple as I am the Director of the Don Bosco Higher Institute of Religious Sciences and because they had thought of this house, in coordination with the Institute, to start the Artemide Zatti House.