Ecuador - Salesian and footballer: the combination to reach the young people of Amazonia 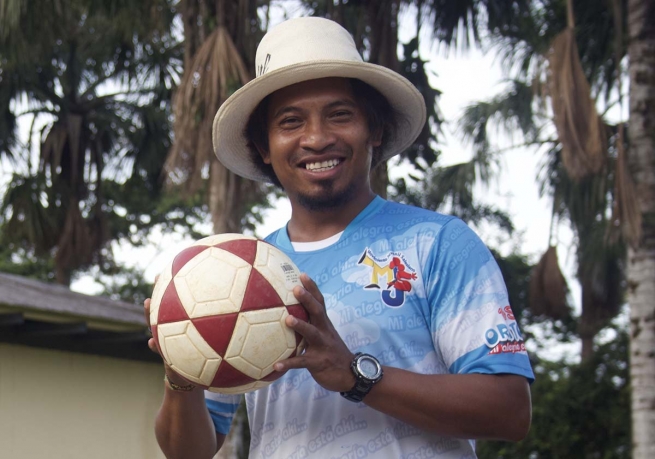 (ANS - Taisha) - During his initial formation phase, Fr Agustinus Togo had to make a fundamental decision for his life: abandon the path he had taken to become a professional footballer or follow God's call? This crossroads in his life came after he had played a friendly match with his mates from the formation house against a professional soccer team from his native Indonesia, a game in which he had dazzled everyone with his skills. And soccer? He did not abandon the sport. He continued to play and appreciate this sport that moves crowds in every corner of the world, such as the Ecuadorian Amazon, where Fr Togo works with the Achuar communities.

At what age did you start playing football?

I started when I was a child. I am from the coastal region and my house is near the beach. There I started playing with my friends and after the games we bathed in the sea. In my life, football has represented a lot, because it allows you to meet with others, to share a climate of friendship and learn values ​​like the support of others, respect, humility.

What is the meaning of football in your pastoral work?

Football moves many people. During the World Cup everyone interrupts their activities to watch the games. The same happens with the Achuar: when there are matches or championships, young people don't care if they have to walk a week or two; they go to play. I see a great deal of concern among young people to be footballers, to learn to play better and I asked myself: why not try another way of evangelizing through football? I believe that evangelization is not only that of the priest who arrives, officiates Mass, confesses ... We must go out, look for other ways of being missionaries, as Pope Francis says.

My dream is to establish a football school in an Achuar village, which does not yet exist, even if young people are eager to improve their technique, their skills ... For this reason, in February of this year, I went to Ambato to attend a three-day congress on Football and Sciences. I started this idea of the school in the Wasakentsa community and I went to train in other communities as well.

What is the challenge with the Achuar youth?

Now there are many from outside, such as drugs and the misuse of technology. And sometimes young people get involved in these things. The objective is to use sport to attract their attention, gradually distance them from these vices and give them the opportunity to be animators and educators of other young people.