Egypt - "The Lord never leaves us short of anything." Interview with Fr Reefat, SDB 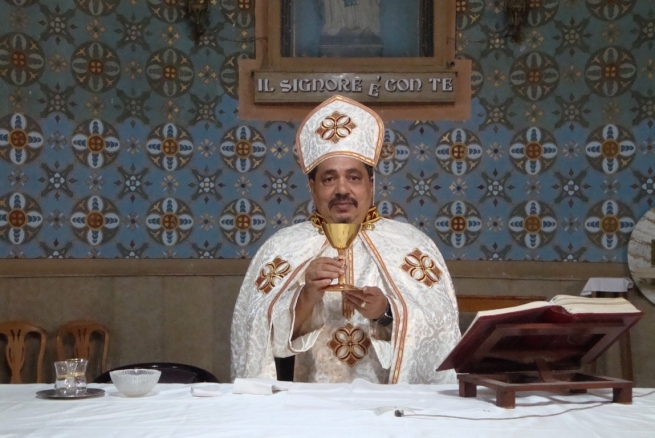 (ANS - Cairo) - Abuna Louis Ghorghi Reefat is a Salesian from the community of Cairo-Zaytoun. Nicoletta Volpi from the communication team of the Salesians in central Italy interviewed him about his life, about Egypt and about young people. Here is a summary:

How did you discover your Salesian vocation in a predominantly Muslim country?

As a child I had a relative who was a priest. For me he was a model and a witness. I was born in Upper Egypt and attended a Christian elementary school, but the majority of the pupils were Muslim. I had many Muslim companions. The director of the school was a Muslim, even a bit of a fanatic.

In fourth grade I started thinking about entering the seminary. Two years later I met a Salesian who spoke to me about vocation and that meeting was decisive. I mentioned to him that I wanted to be a priest (...) and he suggested that I join the Salesian Congregation, instead of the Coptic Catholics. That meeting with the Salesians caused many small "scandals" such as a priest wearing pants instead of the typical Egyptian garment, or bathing in the sea in a bathing costume.

As an Egyptian, what can you tell us about the current political, economic and social situation?

Many things have changed, for the better ... The participation of 24 Christians in the government ranks is a demonstration of this and of the greater freedom that now exists. The climate is such that it does not seem strange for a Christian to come out on the street and offer best wishes to Muslims for Ramadan. (...) At the economic level it still takes time to see the fruits: this is a period of adjustment.

Have you any stories for us?

I have many meetings and get many requests for help. There was a family I got to know a few weeks ago. A man and his wife and two children aged six and four came here to Cairo about two months ago in the hope of finding a cure for the woman's liver, but they had no money. When I first met them they needed at least 50 pounds for medicines. On the same day a benefactor gave me 200 pounds and I gave it to them. Other expenses related to the treatment were met, a bit at a time, and they always kept saying that the Lord would send the money needed. Providence did not let me down! Really, providence seemed to be always on my side! The Lord never leaves us short of anything.