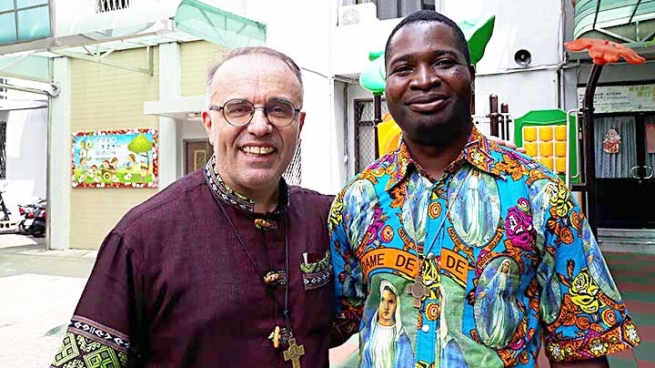 (ANS - Taipei) - The Taipei community received a significant contribution from the AFC Province in November 2018. In that year, in fact, Fr Ephrem Kisenga Mwangwa arrived in Taipei. Although he is still adapting to the new culture and studying the Chinese language, he is already ready to share his insights after his first nine months of missionary life in Asia.

What is your main motivation for coming to Taiwan?

You are living your first year in Asia. What are the common points of African and Asian culture?

My first year in Asia was very interesting and I discovered that Asian tradition and African tradition are close. Some customs are the same, like solidarity, respect for foreigners. Even the world view is almost the same, like the importance given to marriage, how to count the months of the year, because in the African tradition we have 13 months, and it is the same in Chinese culture. But I still can't say I know Asian culture. I need more time, especially for learning the Chinese language!

How would you invite the Salesians of the Congo to come on a mission to Taiwan?

I think the best way to invite Congolese Salesians is to bear good witness of life. The Congolese are usually able to live well everywhere and to get used to things. I humbly believe that the Province of China also needs Congolese confreres, just as the Congolese need to learn from the Chinese.

Do you wish to share any suggestions with the Salesian Congregation?

I think it is important to encourage the Salesians in the Congo to train in other Provinces. But why stop in Asia and China? For my Province it would be very positive to know other cultures, get in touch with different mentalities. It would be interesting to form our confreres in other Provinces. If it were possible, why not start already from the Novitiate? In any case, after more experience, I will be able to give more suggestions. For now, however, it is important to always remain united in prayer.