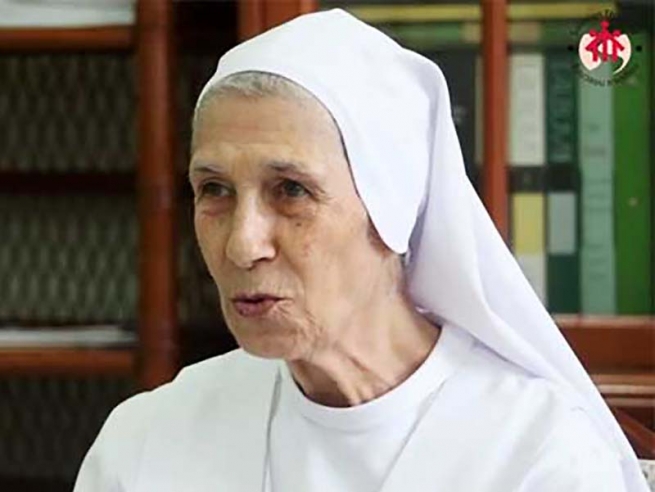 (ANS – Udonthani) – FMA Argentine missionary Sister Ana Rosa Sivori, Pope Francis’ second cousin, who has lived and worked for the young people of Thailand for the last 53 years, will be in attendance during papal meetings in the country later this month. While in Bangkok on November 20-23, Sr Sivori, 77, will be a part of the papal entourage, following the Pope to all his events and encounters, according to Reuters. A few weeks before Pope Francis arrives in Thailand, she was interviewed by different media. And the THA Province Social Communication has also offered a simple five-minute video in Thai with English subtitles.

Your impression of the Pope?

A special character. He is very humble, and he lives a temperate life. He practises what he preaches.

What does it mean to have a Pope as relative of the whole family?

I consider myself a simple person. The Pope is a person of the world. For this reasons, it doesn’t mean anything special. The Pope comes for all Thai people. Of course, I’m happy together with all the Thai people, but it is not considered more special than the others.

How do you feel about his visit to Thailand?

I’m happy that Pope Francis is coming to the Thai people to tell them “God loves you!'

Why did you become a missionary?

I wanted to bring the good news of the Gospel to those who have not known Christ yet and I requested to be a missionary. Then I was sent to Thailand.

What makes you happy as a Salesian Sister?

As a religious, I belong to God already. Being with the young makes me happy, teaching them to be a good person, according to the style of Don Bosco, a good citizen, a Christian or other religious believer. In the school, there are many opportunities for education, especially when I teach catechism. This brings me joy.

Do you have a word for young people?

With Pope Francis, I would like to tell to the young: “Keep your life ideals and fully commit to them. This means strong efforts, of course, but then you will be happy!”

In an interview with Italian magazine Il Mio Papa, Sivori reiterated she is happy to be able to greet her second cousin, but she is “especially happy for the small Catholic community here and for all the Thai people. It is a great blessing and a special gift for Thailand. Although Catholics here are a minority, thanks be to God there is a great religious tolerance that allows peaceful coexistence marked by simplicity and brotherhood.”

And she also told Reuters that when she and Francis talk, “we feel like brother and sister. For me, of course I know that he’s the Pope ... but we talk simply. When I meet him, I’ll call him by his name, Jorge. Pope Francis just came after,” she said. “’m proud of him.”

Sr Sivori and Pope Francis, who grew up in Argentina together, are related through their grandfathers, who were brothers. She joined the Daughters of Mary Help of Christians at the age of 23. She was sent soon after, in 1966, to be a missionary in Thailand, where she has been living ever since. She is currently vice principal of St. Mary’s School in Udon Thani, the northeastern part of Thailand, over 350 miles from the capital city of Bangkok.

Francis’ visit to Thailand is in commemoration of the 350th anniversary of the Vatican Mission to Siam in 1669. The small Catholic community in Thailand, less than 0.5% of the mostly Buddhist population, has been celebrating the anniversary throughout 2019.