Japan – Interview with Bosconian, a descendant of the hidden Christians 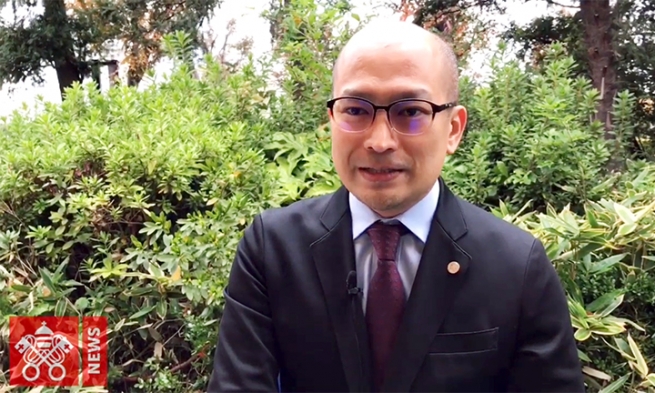 (ANS – Tokyo) – During Pope Francis's recent visit to Japan, one Bosconian (Don Bosco Past Pupil), staff member of Don Bosco Publications and member of the Japan Province Social Communication team, a descendant of the “hidden Christians”, who have kept the faith for the past 470 years, provided a brief interview that can be found on the Vatican News website in Spanish (video) and in English (audio) with a shortened English version text:

The roots of Mitsuhiro Tateishi’s Catholic faith go back centuries, reaching back to the time of Saint Francis Xavier who first brought Christianity to Japan in 1549. That same Jesuit missionary baptized Mr. Tateishi’s ancestors 470 years ago. Mr. Tateishi told Vatican Radio that his father grew up on Ikitsuki Island in Japan’s Nagasaki Prefecture, though he has never lived there himself. It was the elder Mr. Tateishi who passed on the legacy of the faith to his son.

Why were there hidden Christians in Japan?

St Francis Xavier preached the Gospel on nearby Hirado Island, finding it very fertile ground. He spent no more than 4 months in the area, but succeeded in converting hundreds of people to Christianity. Not long after, Japanese rulers began to view the faith as a threat and sought to proscribe Christianity. At first, Toyotomi Hideyoshi, a great Samurai warrior known as Japan’s “great unifier”, banned Jesuits and other foreign missionaries as threats to national unity. In 1614, the Tokugawa shogunate outlawed Christianity outright. Persecutions followed, lasting through the Edo period until 1871. Tens of thousands of Catholics were killed for their faith. The 26 Martyr Saints, to whom Pope Francis paid homage in Nagasaki last November 24, were among those witnesses.

Many of those Catholics went underground, becoming known as kakure kirishitan, or “hidden Christians”. The shoguns often required suspected Christians to trample on holy images to renounce Christianity. Those who refused were usually killed.

“My family chose the way to survive,” said Mr. Tateishi, “so that they could keep and convey the true faith to their descendants.” Throughout that 250-year persecution period, his ancestors hid on Kuroshima Island and passed on the faith from generation to generation, all without the presence of a single Catholic priest.

Christians during the Edo period, Mr. Tateishi said, “were very discriminated against and poor”, ranking below even outcasts in the rigid hierarchy of the time.

How did Christians pass on the faith?

“The Christians helped each other and practiced the teachings of Jesus’ love,” he said, and were respected because they served the poor. Their service of those in need encouraged others to believe in the Christian faith. After Japan allowed freedom on religion in 1871, Catholic missionaries returned and discovered in Nagasaki the descendants of those who kept the faith in silence.

But, Mr. Tateishi noted, “it was very difficult to bring hidden Christians back to the Catholic Church. Most renounced unorthodox, syncretistic practices and rejoined the Church. A few refused and became known as “separated Christians”.

Don Bosco Alumnus, Mr. Tateishi recently returned to Ikitsuki Island to visit where his father grew up, after nearly 30 years in Tokyo. "From our family house, we can see the Catholic Church,” he said. “In the distance, we can even see the small island where many Christians were martyred. People still cherish that place.”

“I am grateful to my ancestors who overcame difficulties and inherited the faith for 470 years.” Mitsuhiro Tateishi ("Mitch") now does his best to pass on the Christian faith, just like his hidden forebearers.