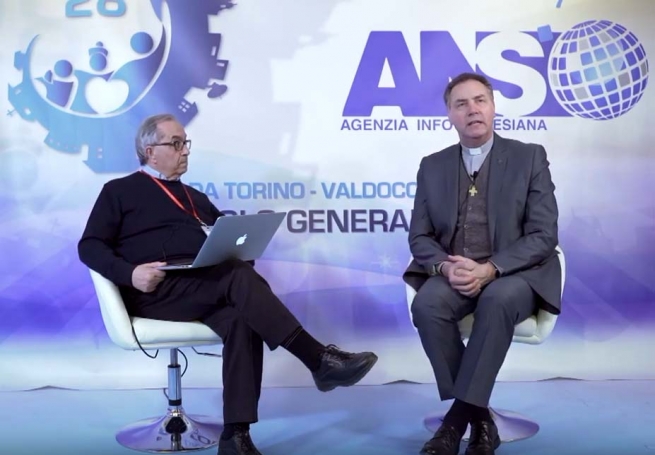 (ANS - Turin) - The choice of Valdocco as the venue for the GC28, the expectations for this chapter, the role of young people and lay people, the sense of frontier presence… There is all this and more in the video interview to the Rector Major, Fr Ángel Fernández Artime, which opens the ANS column "Chapter Inside", on the Chapter's protagonists. A broad summary of the interview is available below.

GC28 is celebrated in Turin-Valdocco: why?

Here we were born as a congregation. Simply looking at the courtyard, Pinardi house, the Basilica of Mary Help of Christians ... the question "What kind of Salesians for today's young people?" finds many answers.

What does the Rector Major expect from the GC28?

First: we want to confirm that still today we have a predilection for the neediest children. Second: even if the educational passion remains unchanged over the generations, we must learn about the way of life, feel and understand the life of young digital native Salesians. Third: this GC28, as well as GC24, which was a Chapter that said a lot about the mission shared with the laity, must help us to fulfill a true conversion where it has not yet been done.

What do you think your confreres expect from this GC28?

I think they expect "new things". Not something never heard of before, but that of saying that still today the Salesians want to serve young people, to live the Salesian dream with freshness. I believe they expect a stronger word on the radical nature of our life, on how to form the Salesians of today, humble, sober …

What has changed from the first General Chapter to the GC28?

The Chapter belongs to the Salesians, but young and lay people will also participate. Why?

It wasn't a marketing choice to be popular. We have called significant young people and lay people who will help us in the second part of the chapter when we have to make decisions. We want to hear their opinion, their way of looking at us and looking at the Salesian reality.

Of the three groups in which the theme is articulated (mission with the young, the profile of the Salesian, the shared mission), is it possible to privilege one?

No, they are interconnected. One cannot answer the question "What kind of Salesians for today's young people?" if all three aspects are not addressed. If you take away the priority of the mission with the young people, it will be another consecrated person, but not a Salesian of Don Bosco. At the same time, to reach the young people of today one cannot help but reflect on which Salesian to form. And finally, it is not possible today to think of doing a Salesian mission without the involvement of the laity.

The Salesians are often present in many of the world's frontiers. What does the Congregation specifically offer?

I was in Venezuela a few days ago: what do our confreres do that is special? "Everything and nothing special," I'd reply. They simply accompany people's lives, trying not to lose dignity, the will to live, giving emergency responses to emergency situations. I believe that that's a bit the secret.

The full video interview is available on ANSChannel (in Spanish; and Italian - part 1 and part 2).