Italy – GC28 - Fr Pascual Chávez: "There will be no other way to change society except through education" 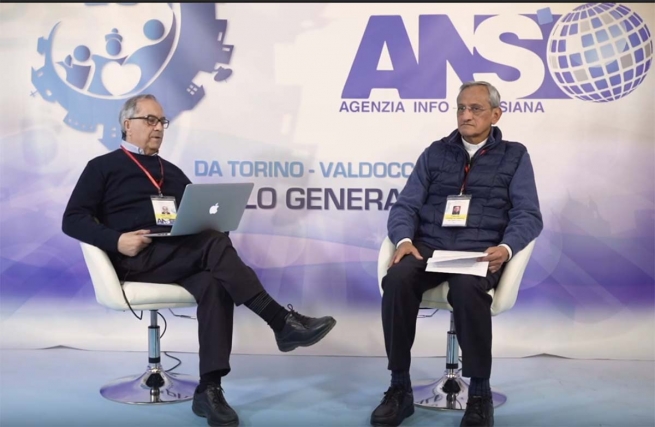 (ANS - Turin) - The representatives of the Salesians from all over the world have gathered in Valdocco, there to experience General Chapter 28. They speak one single language and walk with one feeling: the young. The Salesian charism, the option for young people, the gift of a great Father, Don Bosco, throbs in their hearts. In an interview conducted by Fr Daniel García, SDB, Fr Pascual Chávez Villanueva, Rector Major emeritus, answers questions beginning from his experience of 12 years of service at the helm of the Congregation and of the last 6 years around the world, on issues touching the lives of the Salesians. His answers invite the Salesians to look to the Congregation from a current perspective "to continue to have efficacy and validity as Salesians of Don Bosco", and to collaborate to "give answers to a changing society and to a world and to a Church that expect, from us, an answer in favor of young people."

Traveling around the world in the past six years, what image does the Congregation have?

The first thing to do is to thank the Rector Major, Fr Ángel Fernández Artime, for giving me a truly emotional, [exciting] mission. This service gave me the opportunity to be in contact with the Congregation in many parts of the world. I confirm that ours is a Congregation with a dynamic and profound charismatic identity. But it allowed me to see things from a different perspective, and I was able to touch the problems that the confreres are experiencing. For example, the ease with which prayer can be sacrificed to the idolatry of activity. It has been noted that there are fewer confreres who carry the weight of the structures. There are some tensions in inter-generational and intercultural communities, that is, where the number of older confreres is growing and that of young people is decreasing, where there are different sensitivities and often the family climate is not assured, nor is it possible to understand and carry on the Salesian mission.

Do you think that the three nuclei proposed by GC28 can be considered separately, or should they be assumed and lived in unity?

In my opinion, the three nuclei proposed by this General Chapter 28 are intimately connected and cannot be separated. They can be separated in view of their study and should be deepened one by one, but without ever losing their unity. Consecrated life is changing and is made up of four elements. The first element is the diversity of the origin of vocations. The second important element is the new generations of religious. What kind of formation for this type of youth? In this way, one guarantees the identity of the Salesian charism necessary today. The third element is that there is a new priority that always functions as per the mission and the works. Finally, there is a new subject, with all that this means. I believe that the three nuclei of the chapter cannot be separated. They are united.

The full interview is available on ANSChannel in English, Spanish and Italian.