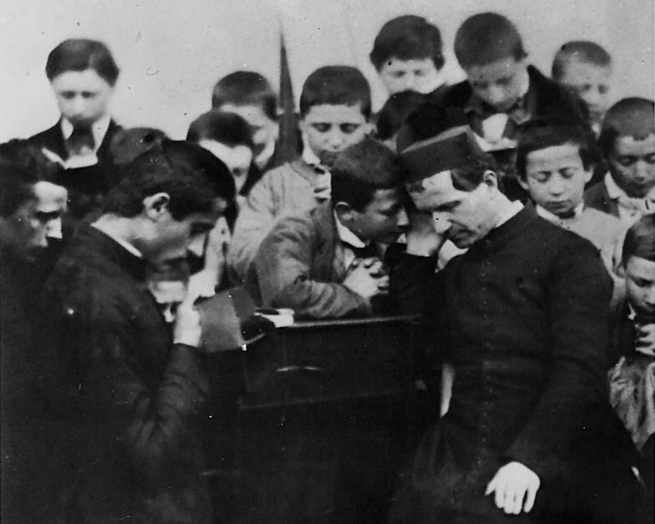 Dear readers and friends, this January issue coincides with the great worldwide celebration of Don Bosco’s feast on January 31. And there is something else:

In 2021 we’ll commemorate the centennial of the death of his second successor, Fr. Paul Albera, whom Don Bosco called Paolino. In fact, Fr. Albera himself, after becoming a Salesian, recounted in reference to the famous photograph in which Don Bosco “posed” as if hearing the confession of one of his boys, with many others around, how "Don Bosco had to select one of them to take a place on the kneeler as if confessing his sins. He looked around and, smiling, called:  ‘Paolino, come here. Kneel down and put your forehead on mine, so that we won’t move!’’

This is our Don Bosco, able to make all his boys, and each one in particular, feel that they were loved, that they were really special and that he had wonderful plans for each of them, because they were God’s plans.

In fact, I’ll express my strong conviction that Don Bosco had the great capacity to make his boys experience life as a feast and faith as happiness.

It seems to me that this is the great gift or one of Don Bosco’s great gifts. So many times, trying to penetrate as deeply as I could into his heart, I’ve thought about this, because this conveys everything: he had the ability to make ordinary daily life with its burdens and weariness, and often enough its hunger and thirst, into a reason to live joyfully. And that’s how Don Bosco was, helping his boys feel very happy to love God and be loved by Him. Tell me whether this isn’t something typical of someone who’s truly a pedagogical genius.

Many years ago, when I saw the film Life Is Beautiful, I was deeply moved by that father’s love and also the genius he had for making his little boy experience the horror of the concentration camp as an adventure, at times as a game, as a reason to be surprised. Someone might say that the only thing father did in the film was deceive his son. No, that’s not so. This father had the genius, out of love, of making his little boy live reality, the only reality that was there, in such a way that the horror of every day wouldn’t crush him, in a way that allowed his smile and the light of his face never to disappear.

Don Bosco was a master at this. He was a genius in knowing how to find happiness and reasons for hope in little things, in the signs of attention that he devoted to everyone, in the simple gestures that seem to be lost in the ordinariness of every day but that have great importance and very great value.

This is a precious heritage that Don Bosco left to his Salesians and Daughters of Mary Help of Christians, to his entire Salesian Family: that of being men and women who every day seek the gift of sympathy for meeting boys and girls, with a very concrete and real sense of encounter with each person—also with the shyest, with those whom they perceive to have fewer aptitudes and gifts; of being women and men who are always able to take the first step when it comes to reaching out to young people, who seek to approach everyone with respect, with the desire to understand and help, with happiness at being present among them, in particular those most in need. This is Salesian amorevolezza: a true affection as educators in whom there’s both human warmth and spiritual delicacy.

For this and much more, every boy in Don Bosco’s Oratory felt he was the one whom Don Bosco loved best, as if he were the only boy. This is a beautiful reason for you to celebrate Don Bosco’s feast spectacularly in this new year, as we come out of a year made difficult by Covid-19 and its consequences, trusting that we’ll be able to beat it in a few months. Let’s make every educational space, every Salesian house, every personal encounter, a reason to feel that life is beautiful, it’s worth living as what it is, it’s God’s gift, and so is to be lived as a feast even on gloomy days, lived full of the light that comes from abandoning oneself and trusting in the God of life.

I wish you a most happy 2021 filled with God’s blessings and the maternal presence of Mary, our MOTHER, the Help of Christians.