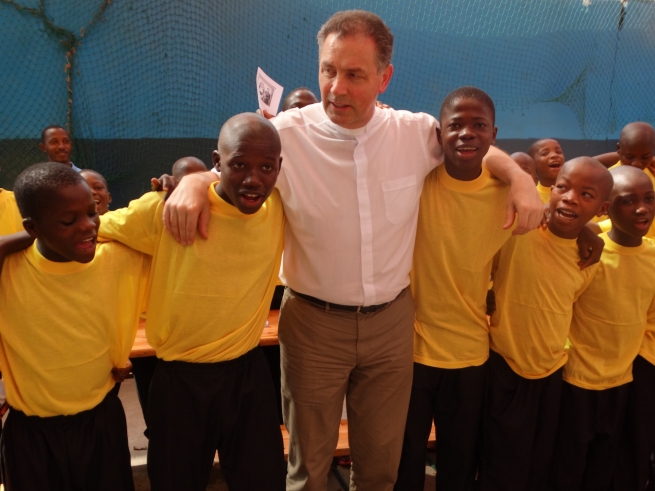 I keep repeating in many places and on many occasions, my dear Salesian Family, Friends of Don Bosco’s Works, and all of you whom I meet monthly through the pages of this magazine: every day prodigious “miracles” of education are happening which are changing the lives of many boys and girls forever.  I say this with certainty because I myself have been a witness of it and when I recall it to mind, my heart brims with joy and with hope.

This year I celebrated Don Bosco’s Feast Day, January 31, in Sierra Leone.  I wanted to share that Feast with my brother Salesians who work in that land and with their children and young people.  I was able to spend a morning with the young who were incarcerated in the jail of the capital city.  All around me I saw so much pain but also very great hope.  This hope has much to do with the daily presence of the Salesians and the lay volunteers in that place of suffering.

I was in the company of young people who had been taken in from the street and who were living and being educated in Don Bosco’s house.  And I was overtaken by emotion when listening to the words of a young lady, about 25 years old, who recounted her story in front of everyone present – among whom were 38 young women removed from the snares of sexual exploitation.

That young woman had suffered terrible abuse and violence in her family ever since she lost her mother; but when she finally succeeded in running away from her house and her city, she arrived at Don Bosco’s house.  There she found a home, a family, and a secure refuge in which to prepare herself for life.

Her story moved me greatly – above all when the young lady had the courage to tell the youth who were listening that the most important freedom she experienced in being released from the chains of violence and abuse was to have found a home and the possibility to study and to prepare herself for life.  Now she would be able to provide for herself, with a happy life and a skilled labor job.

I am convinced more than ever that each day extraordinary “educational miracles” take place in so many areas around the world – and with certainty that this is happening in almost all the Salesian Houses.  These are true miracles of young men and women, boys and girls, who have found an opportunity, who have been reclaimed from the streets, who have found welcome in a Salesian House where they have encountered authentic mothers and fathers who exist only to love them and educate them.  These are the miracles which change their lives forever and which break down that oppressive and cruel wall of fear which torments them from their birth so as to allow to enter in what they need to live – like air: that new breath which is called hope.

Men and women who, like Jesus at Naim, say “Do not cry!” are creating these miracles.  God does not wish that human beings cry.  Like Jesus, Don Bosco was able to take profound joy in the love of the Father for His little ones, with the ability to suffer with them and to alleviate their pain.  This is the testament that Don Bosco has left to us.

The first Salesians and Daughters of Mary Help of Christians applied themselves to give new possibilities in life to those who were convinced that they had none.  They prepared boys and girls for life and to have faith in life – in an atmosphere pervaded by affection and understanding.

Thus testifies an ancient story of wisdom literature, entitled “The Secret”: “From the time he was a little boy, Mordecai was a true pest; so his parents brought him to a holy man to whom all had recourse when they needed advice in the most difficult cases.  ‘Leave the boy with me for a quarter of an hour,’ said the saintly man.  After the had parents left the room, the old man closed the door.  Mordecai was afraid.  The holy man approached the boy and embraced him without saying a word.  He held him tight.  That day, Mordecai learned how people are converted.”

The forest that is growing

Today, the 30 Groups that comprise the Salesian Family are doing just this all over the world – each one with its own specific characteristics, while drawing from the same spring of the Salesian charism.

In a world which is becoming ever more materialistic, skeptical, and pragmatic, it might seem strange to speak of miracles.  But I wish to reclaim this luminous reality.  The good that is done – and it is a great deal – must not be hidden.  “That they may see your good works,” Jesus said to His Disciples.  Everyone dreams of a world of peace and serenity where one can almost breathe respect and caring attention in the air.

Courage, then.  We can make miracles.  There are those in the front lines who help them and sustain them.  There are educators, Religious, and laity who spend themselves each day of their life so that the most disadvantaged youth might have a future and a sense of hope.  Let us support and help them through our works of solidarity, with our affection, and tangible offerings.

We know the profound truth in the adage which says that “a tree that falls makes more noise than a forest that is growing.”  We are those who make the forest of hope and of meaning in life grow up each day in so many persons who have nothing to lose because they have already lost everything, and who have much to gain.

May this be the task and the commitment of the Salesian Family in the world.