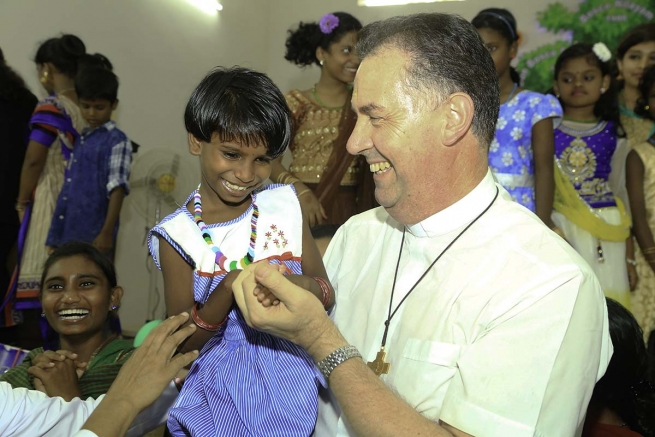 Never before had the good citizens of Turin seen such a spectacle as they did in 1842. Along the elegant streets of Turin’s center city, a group of boys were singing a Christmas hymn and a priest was directing them! The music was a bit unsophisticated, but those boys sang it with so much love that it moved all who heard it. Don Bosco had no place to gather the boys to practice the song, so they practiced right in the streets – those streets that the boys knew so well. The hymn had even been written on a windowsill.

Those boys lived their Christmas walking, just like Jesus’ parents when they set out on a journey from Nazareth to Bethlehem. There they experienced what it means to live in a foreign land: there was no room for them in the inn. The doors of the people's homes were shut to them.

Mary and Joseph share the fate of many refugees and foreign workers who seek a home and are turned away, today, just like 2,000 years ago. Don Bosco's boys, too, were looking for a place where they would find protection so they could grow, far away from all perils. Don Bosco searched with them and committed his very life to find it.

During my visits to the Salesians around the world, I have encountered many children and young people who find a home and protection in the arms and the affection of Don Bosco's sons. I have also seen children – boys and girls – all over the world singing happily together.

Jesus was born in a stable. Men did not welcome him; the humble animals shared their shelter with him. Don Bosco began his work in a dirty and broken-down shed. With Jesus’ birth, the stable was filled with light – warm and gentle light – and all that was poor and despised became precious. A manger for animals became the throne of the Most High.

The ramshackle Pinardi shed would have discouraged anyone. Don Giovanni Battista Francesia testified: "When Don Bosco visited that place for the first time, the place which had to serve for his Oratory, he had to pay attention lest he crack his skull because on one side the shed was only a meter high. For a floor, there was bare ground, and when it rained, the water came in from every side. Don Bosco felt huge rats running between his feet, and over his head swooped bats.”

But to Don Bosco, this was the most beautiful place in the whole world: "I ran right back to my boys. I gathered them round me and began to shout in a loud voice, ‘Great news, my sons! We’ve got a place for our Oratory, a more reliable one than we’ve had till now. We’ll have a church, a sacristy, classrooms, and a place to play. Sunday, next Sunday, we’ll go to our new Oratory, which is over there in Pinardi’s house.’ And I pointed the place out to them. Wild enthusiasm greeted this announcement. Some boys ran around shouting and jumping for joy; some stood stock still; some raised their voices, I would say, to yelling and screaming." (Memoirs of the Oratory of St. Francis de Sales [1989], p. 257)

Why John Bosco dreamt. The Christmas angel appeared in a different way in the Gospel of Matthew. Here there was no splendor surrounding the Holy Birth. The angel appeared to Joseph in a dream. It was he who commanded him in God's name to take care of that Baby. The angel appeared to him at other times in dreams also. Joseph did exactly as he was told, right up till the time when Mary’s Son would reach the age when no one could make a further attempt on his life.

In dreams, Don Bosco was invited to care for the boys and young men, to help them grow, with affection and goodness, lest any Herod threaten them any longer. Throughout the entire world, I have seen Salesians who defend children and young people from the many Herods of our day and who continue to dream, guided by the angels, just like Don Bosco.

“Do as the Shepherds Did”

I will allow Don Bosco himself to conclude my Christmas wishes. In the Good Night that preceded one of the Christmas novenas at the Oratory, he said: "Tomorrow begins the Christmas novena. I recommend two things to you for these days. Call Baby Jesus to mind often; recall the love that He brings you and the proofs that He has given you of His Love - to the point of dying for you. When you get up in the morning immediately at the sound of the bell, and feel the cold, recall to mind Baby Jesus, who trembled from the cold, there on the hay. Throughout the day, encourage each other to study your lessons well, to do your work well, and to stay attentive in school out of love for Jesus. Do not forget that Jesus advanced in wisdom, in age, and in grace before God and men. Above all, for love of Jesus, watch that you do not fall into any sin that could disgust Him. Do as the shepherds of Bethlehem did: go often to visit Him. We envy those shepherds who went to the stable in Bethlehem, who saw Him as a newborn babe, who kissed His little hand, and who offered Him their gifts. How very blessed those shepherds were, we say! Yet, we have nothing to envy because that same blessing is also ours. That same Jesus, who was visited by the shepherds in the stable, is found here in our tabernacle. The only difference rests in this: that the shepherds saw Him with their eyes of flesh; we see Him only with the eyes of faith. There is nothing that we can do that would be more pleasing to Him than to go often to visit Him. How shall we go visit Him? First of all, with frequent Communion. Another way is to go every now and then into church during the day, perhaps just for a minute."

Wherever there is a Salesian work, I have seen churches, some small and some large, but every one of them with an image of Mary with Baby Jesus in her arms – just as it was in Bethlehem 2,000 years ago.