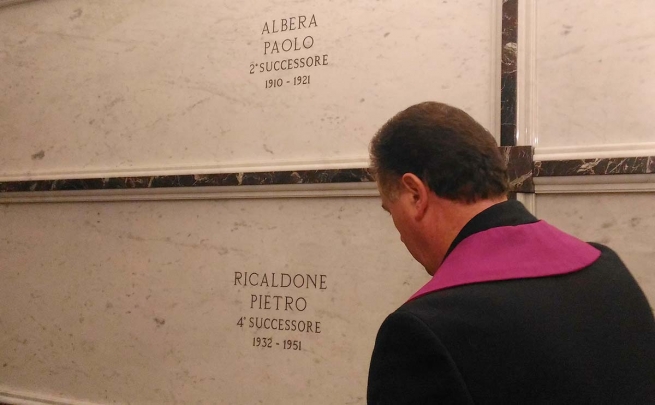 (ANS - Turin) - Meant to encourage the memory and prayer for the Rector Majors who pursued the dream of Don Bosco with fidelity and commitment through the years, the placement of the mortal remains of Don Bosco's Successors in the crypt of Turin's Basilica of Mary Help of Christians has been completed.

The significance of this initiative lies above all in the role that the Rector Major occupies in the Congregation and in the Salesian Family, of which he is the center of its charismatic and apostolic communion. As the Charismatic Charter of the Salesian Family states: "To him (to the Rector Major) everyone acknowledges a triple ministry of unity: Successor of Don Bosco, common Father, center of unity of the whole Family ... For this mission, the Rector Major takes on the duty of offering the necessary guidelines in order to ensure the fruitfulness of the charism in each Family Group. By example and magisterium, he weaves the plot of unity and ensures, in the variety of specific vocations, fidelity to the spirit and the coordination of various initiatives. He exercises this ministry with the sense of paternity that was proper to Don Bosco: an attitude and behaviour that requires understanding, goodness and generosity, attention to the individual growth of each person, a guide in charismatic fidelity, commitment to the fruitfulness of the Salesian vocation in all its expressions, as Don Bosco wrote: 'Your Rector will take care of you and of your eternal salvation.'"

The seeing together of the Rector Majors who have followed one another over the years is to retrace a history that brings us back to the origins of the Salesian charism and shows us how in the succession of times and generations there is a thread of fidelity and creativity. The alternation of faces, names and dates is also a strong stimulus to remember a story and a history that already touches three centuries. As I have already said: "It is not a cult of the person", but a sign of affection, of gratitude and awareness for the work accomplished by the deceased Major Rectors. The prayer of suffrage, before these tombs, therefore becomes a commitment to cultivate the sense of belonging and of unity to the charismatic heritage that they have witnessed in their ministry as Successors of Don Bosco.

It is also important to stress that the tombs of the Rector Majors are safeguarded in a special place: the chapel of the relics, one of the most evocative places of Salesian spirituality. It is a holy place that refers us back to the beginnings of Don Bosco's oratory, to the Filippi meadow, to the visions by which Our Lady indicated her apostolic mission to the Saint of the Young; moreover, the numerous relics of saints and blesseds preserved here reproduce the whole history of the Church with its variegated testimony of sanctity.

This means that even the memory of the Rector Majors is an invitation and a stimulus to that call to holiness that animated all the work of evangelization by Don Bosco. In this perspective, it is important to remember that two of his successors, Father Michele Rua and Father Filippo Rinaldi, are blessed.

This memory evokes a joyful and painful past history and, at the same time, projects forward towards a future of hope. It is the marvelous story of a fecundity that continues and stimulates to give adequate answers to the educational needs of today's children and youth, with proposals for integral formation so that they may be in and part of today's society and Church as: "good Christians and honest citizens". To us, the task of safeguarding and increasing this spiritual and educational heritage left us by Don Bosco and developed by his successors.