JESUS IN THE ARMS OF THE HUMBLE AND THE POOR
Featured 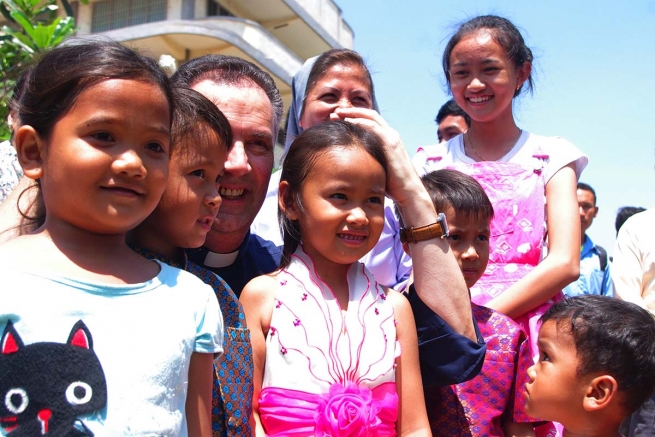 Jesus continues to save humanity through our work, our self-giving, our good will. He continues to point out the road to us lest we lose our bearings and our way, and we always assist those who are growing weary, the humblest, the poorest, the least.

During the Christmas season I recounted a legend that tells this story: When the shepherds received the news of the birth of Jesus, the Messiah, all of them went to find the child, bringing with them little gifts – the things which they had with them like milk, cottage cheese, honey, etc.

Among all these shepherds there was a boy who had nothing to bring to the newborn babe; he came with empty hands, feeling very ashamed and blushing because he couldn’t offer anything.

When the shepherds reached the place indicated by the star, they found the baby, Mary his Mother, and Joseph.  Since Mary was holding the newborn babe in her arms, it was difficult for her to receive the gifts they’d brought, to accept them and thank the shepherds for them.  So, the legend continues, she asked the little shepherd boy who had nothing in his hands to hold the baby while she gave all her attention and thanks to the shepherds.

And the story concludes by saying how the humblest of the shepherds had the great privilege to be the first, and the only one that night, to hold the Messiah, the Savior, Jesus in his arms.

Both the legend and its message offer us a clear understanding of the predilection that God’s Love has for the poorest, humblest, neediest, and most rejected people of this world.

We bring to its conclusion what Jesus has begun

It is precisely this that I want to refer to now.

When I’ve been visiting Salesian presences around the world, in the most varied places on six continents, I’ve run into a lot of situations in which my heart and my thoughts have led me to feel and to think that those persons – adults, youths, boys, and girls, very many times among the poorest people – were without a doubt held in God’s gaze and in his heart in a preferential way.  Certainly, we’re all held in his heart.  We’re all his sons and daughters, but these least ones he holds in a special way.  Surely, he’s like a mother who loves all her different children with an unconditional and total love.  Still, to those most in need God gives his more special, unique attention, while not economizing on any gesture of love for all the others.

While I was writing these lines, my thoughts turned to the refugees in the camp at Kakuma in northern Kenya, where our Salesian community has been sharing life with them for many years.  I thought of the refugee camp in Uganda where, after Don Bosco’s feastday at the end of January, a new Salesian community comprised of confreres from different nations will go to share the story of those people and of many youths who arrived there after fleeing from war, hunger, and danger to their lives.

I thought of Yakutsk in Siberia, considered to be the coldest place on earth, thousands of miles (kilometers) northeast of Moscow, where there’s also a Salesian missionary community that shares the life of the people in these little communities (who are, perhaps, like the little shepherd in the legend), and who say to our SDB confreres at any given moment, “We thank God that you are here, because we thought God had forgotten us.”  Hearing that shocks you.

My thoughts turned to the street children whom I’ve met in many places in the world and who certainly are true “castaways” – using Pope Francis’s terminology – because they don’t have the least chance in life to grow in their human dignity.  I said to myself that the ones who will reach the Gate of Bethlehem much sooner than I will are those who carry the child in their hands.

This is the powerful and, at times, painful reality that we meet in life.

Despite these situations spread so far around the world, when the President of the U.N. tells the world in his end-of-the-year-evaluation, with great sorrow and concern, that the year just ended was the year when humanity was worse than ever before and that we run many more risks – nevertheless, given that this humanity has been redeemed and saved through God’s Son, who has shared our condition and our story, we can’t lose faith and hope. And we must follow him by exercising our freedom to add our own vigorous work to this salvation which God has given us, and not to venture into directions where the poorest, the least, and the neediest find no meaning.

This is the great human task which continues to follow us because it has not been brought to its final goal.

Still, all of us – you who are reading these pages – are invited to continue to construct this humanity and a better world, including the hope that, just as in the legend, our living and our working truly merit that we may hold in our “arms” the newborn child, the Messiah, the Son of God whom Mary placed for a few minutes in the hands of the one who had nothing to offer, except his heart.