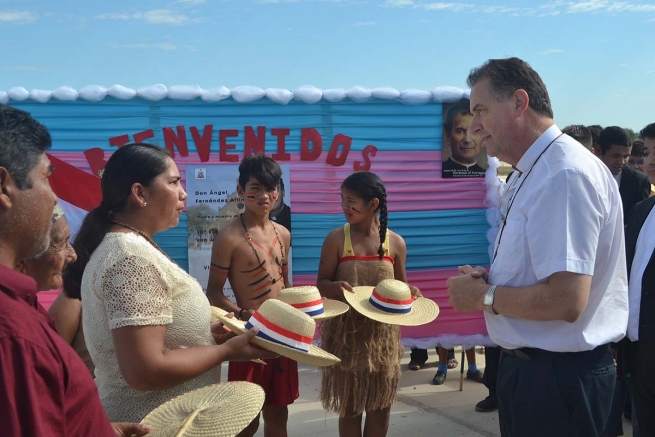 My dear friends, I greet you all most cordially as I write this to you – though I am very late as regards preparation of the Salesian Bulletin. (I make the editor sweat because very often the deadline for submission is upon me as I sit down to write my message – which happens with everything else that bears my name and is penned in my own hand.)

Today I am writing to you just one hour after having returned to Asuncion, Paraguay’s capital, from Chaco Paraguay, where we spent three very full and beautiful days, filled with numerous experiences of many kinds. I was able to greet various indigenous peoples and share with them. This was precisely the purpose of my trip and what I had asked for. I wanted to come to know and greet these indigenous peoples with whom my Salesian confreres and my sisters, the Daughters of Mary Help of Christians, have been sharing life – and for the past 70 years in some cases.

I spent a few hours with the Chamacoco tribe in Alto Paraguay, in the region near Fuerte Olimpo. After a long journey, we reached the people living in Carmelo Peralta, where I was able to spend an entire morning with the different communities of the Ayoreo tribe. Finally, after a three-hour trip by canoe on the Paraguay River, which separates Paraguay from Brazil, and after a difficult trip along inundated trails in Puerto Casado, we were able to meet with the communities of the Maskoy tribe.

My heart was filled with happiness and emotion, and I can now tell you with complete certainty that the missionary dream that Don Bosco always had in his heart, whose fulfillment began in Patagonia, continues today and is still very much alive: I have seen it and have lived it. I was able to experience for myself the joy of these peoples who are grateful for the seven decades that my Salesian confreres and sisters have been present among them. I can further assure you that it is very hard to live in the Chaco today; it is as hard as one might imagine it was 50 years ago. It was my joy to be able to give a very loving embrace, filled with pride, to my brother Salesians who have lived in the Chaco for 40, 42, and even 51 years – at times with temperatures up to 45°C/112  accompanied by extreme humidity. Their “option for Jesus” very simply bears the names Chamacoco, Ayoreo, and Maskoy.

It touched my heart deeply to hear from their chiefs – their caciques – that the only ones whom they allowed to remain with them were these our confreres because they did not find them harmful. Thirty years before public instruction began among these indigenous peoples, our confreres had already begun schools for them. After graduation from our schools, the children took tests in public schools, and from there they attended the normal schools for teachers and professors. Among the Ayoreo people of Maria Auxiliadora in Puerto Casado, there is Oscar, one of those young students. Today he is the father of a family and the principal of their school. Among the Maskoy, the cacique studied in the Salesian school in Puerto Casado. His sons and daughters did so also, and at present two of them are studying in the university in Asuncion. With joy and a bit of humor, he recounted to me that the Salamancan Salesian missionary Father Martin was his primary school teacher and that Martin is still here – present with me today.

How can we help but believe that Don Bosco feels proud of his sons and daughters?

They were also instrumental in the fight to recover the lands of the indigenous peoples. Some years ago, the SDBs moved heaven and earth, so that 2,000 hectares (5,000 acres) of land could be handed over to the tribe and they could annex those hectares to the ones that had already been returned to the Ayoreo people. They also carried on the same fight for the Maskoy people, who have been able to recover the lands taken from them.

I experienced all of this, together with the strong faith of these simple people – of faith in Baby Jesus and the Blessed Virgin – as well as faith in God our Father and Jesus Christ our Lord.

There is also hope. There are those who believe that they are on the road to extinction, and others who are happy to see it happen. But, thanks be to God, these people are recovering and their population is increasing. Their children grow and study and receive formation so that they may be ever freer and that no one, ever, will be able violate their rights or subjugate them through corruption and deceit.

And so, I say today: I believe in Don Bosco’s missionary dream – and I have touched it with my very own hands.

My wish is for every good for all of you, as well as for these peoples who teach us so much with their lives.