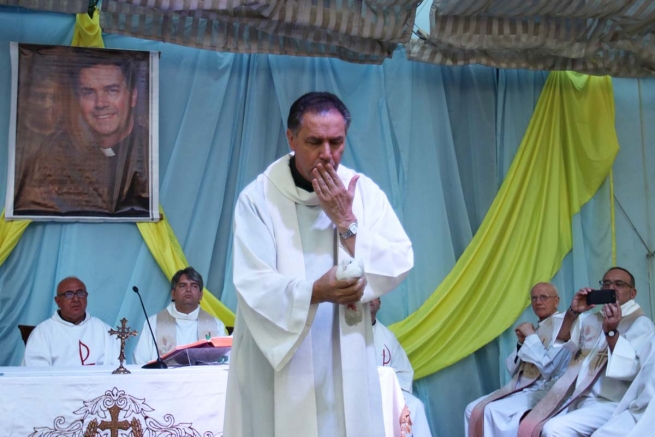 From an unforgettable experience is born a message of love and gratitude to the people of Damascus and Aleppo.

Today I speak to you of a gift I received in Syria – in Damascus, to be exact – on the same day in which a white dove of peace was set free late in the day during the celebration at the oratory. At that very moment a mortar fell right into the same square where, just the evening before, we had been standing with the SDBs and the young animators.

We had celebrated our belief that peace was near, as fifteen days had passed with no bombardments and it seemed that everything had finished. But it was not so. Other people have other interests – not like those of these simple people with whom I was meeting.

They had welcomed us the day before as if they were celebrating a great feast day. They had been hoping for months and months that it would be possible for the Rector Major to visit them – and we made it. It was a long trip, but we finally reached the gates of Damascus – the first and very significant stop on our journey.

There was great joy in that Salesian oratory in Damascus. More than 500 boys and girls, teens, and young adults were there for this evening celebration. Among them there was a group of 150 animators, university students who are the life and the soul of the animation in this oratory which brings together over 1,000 children of all ages from places very remote from the city. This same phenomenon is now happening in Aleppo – with the difference that more than 72% of Aleppo has been destroyed and lies in ruins.

At the end of Holy Mass in Damascus, they presented me with a gift. They brought me a beautiful stole and said that they hoped it would accompany me when I celebrate Holy Mass in other places around the world. They pointed out to me the words in Arabic that were written on it: “Do not forget to pray for us.”

This gift and the words on it touched my heart, to the point that I have worn it from that moment on in all the Masses I have said in the very diverse places I have visited: Tijuana, Mexico; Chaco Paraguay; Uruguay; and Rijeka, Croatia.

Everywhere, in all the Salesian places where I went, I explained and commented on the encounter I had had in Damascus, the gift, and the request they had made of me. At the same time, I recounted all that I had encountered in those Salesians and Daughters of Mary Help of Christians with whom I spent some days, as well as what I encountered in the truly fascinating young animators and in so many families touched by suffering and so much loss, yet full of life and hope.

Do you know what I encountered?

1. I encountered DIGNITY. The dignity of the poor, the dignity of those who feel overwhelmed by a situation not of their creation and in which they did not choose to participate, but in which they are immersed, fully immersed, but unable to choose anything else, or to get out of it until others decide that it should all come to an end. Still, they bear great dignity, with a penetrating gaze that speaks volumes.

2. I encountered MOST BEAUTIFUL AND AFFECTIONATE SMILES. These young animators make a conscious effort to smile – for they want the children to find a little oasis in the oratory for those few hours that they can leave behind fear of war, mortars, and destruction.

This made me recall to mind the film Life Is Beautiful, in which this wonderful dad helps his son – both of whom were imprisoned in a concentration camp along with the mom – believe he is participating in a game and an enjoyable adventure, and live as if it were so.

Our Salesian confreres and sisters, together with these young animators, are doing everything possible so that the war and its destruction will not have the last word. This is no amusing game as in the film. Still, I noticed that they do not wish to allow the bullets and the destruction to leave their marks on their lives forever.

3. I encountered a great sense of HOPE

This is the right word for the sentiment that struck within me when they said to me, “Don Angel, we are not afraid because we are filled with Faith and Hope.” Then they said that “the ‘last word’ is neither the war nor the destruction. No – life, our lives, the faith that we have, and the desire to live and make of this land a beautiful country are the ‘last word’”. The same young people who told me this also told me, in many cases, that they had lost their home, and that a parent or a brother or sister had fallen and died on account of a bullet which crossed their path.

4. I also discovered that they had a profound sense of COMMUNION AND FRATERNITY. I can assure you that, even if before meeting them, I felt very close to them and held these Salesian confreres and sisters and these precious young people in my heart. After having come to know them, having seen their smiles, and after having received their embraces that expressed so much confidence and so much affection, I now hold them much closer in my heart, and not one day passes in which I do not keep them in my prayers.

After these days in Damascus, with sadness and suffering, while more missiles fell there, we traveled to Aleppo. There we met with other Salesian confreres, other FMAs, and more marvelous young people and their families, the children of the oratory, who, as at Damascus, continue to feel there is reason to hope. These were unforgettable encounters, unforgettable moments of prayer and of Salesian Family. Beautiful were the Promises made by thirteen Salesian Cooperators (young adults and mothers of families). I experienced yet again the pain of the loss of their loved ones and of the destruction which is total and complete here in this once beautiful city. Yet I again encountered dignity, strength, hope, and faith.

One little detail is missing: on this occasion, there was no gift of a precious stole with a saying in Arabic on it, but something else which I received with emotion as it disarmed me within and left me speechless. I am speaking of the moment in which the director of the house of that Salesian oratory brought before me all the children, young people, and families who had been collecting money for a long time to send to other even poorer places, places undergoing more conflict – asking me whether such places existed.

They brought to me all that they could, there among their homes lying in ruin. They gave me $200.00 – something which seemed to me a veritable treasure – just as it did those to whom I brought it in the Salesian oratory at the border in Tijuana. The good people of Tijuana immediately got into contact with their brothers and sisters in Aleppo. The poor understand each other magnificently well because they speak the same language – that of true humanity.

There you have it, my friends. This is what I experienced in my encounter with those who have not lost their dignity, their hope, or their faith. This caress flies to Damascus and Aleppo, where many hearts will feel its embrace.