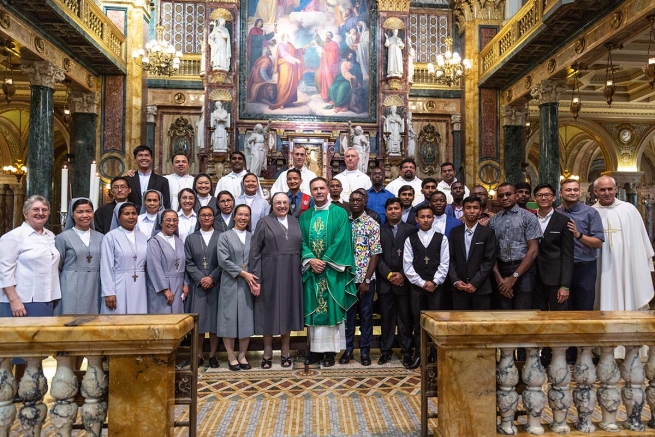 I am writing to you, my dear friends, just a few hours after having bestowed the missionary cross on a group of ten Daughters of Mary Help of Christians and twenty-five Salesians of Don Bosco who will leave in this 149th missionary expedition. We count the number of expeditions from the very first one prepared by Don Bosco himself for November 11, 1875. On that occasion, the first ten Salesian missionaries were sent to Argentina: six young priests and four Salesian brothers. Those first ones have been followed by about 11,000 Salesians and 2,500 Daughters of Mary Help of Christians, 2,000 of them Italian FMAs who left Europe for the world.

This is a marvelous reality which brings me to say that good news still exists which can be understood and communicated.

While bestowing the crucifixes, I saw in the eyes of these young men and women one and the same light: the reflection of the words which they pronounced: “I wish to live the verse of Psalm 105 which says, ‘The Lord called Moses and Aaron, men with His heart. Mine is a call, not a choice.” Their serene and decided attitude helped us relive our own personal call in a certain way.

This is a call which regards not only the consecrated Salesian religious but all the members of the Salesian Family because, in one way or another, we have all been called to be missionary disciples to the young and the neediest in every corner of our beautiful, beloved, and suffering world.

In reality, Christians do not have a mission, they are a mission. All Christians have been called to live the Mystery of the Incarnation; i.e., to be God’s living presence in their tangible flesh and in the mystical flesh of the community.

In the Fioretti of Saint Francis, there is an enchanting story. One day, when leaving the monastery Saint Francis met Brother Leo. He was a simple and good brother, and Francis loved him very much. Upon meeting him he said, “Brother Leo, come, let’s go preach.”

“My father,” answered Brother Leo, “you know that I have not had much schooling. How would I be able to preach to people?”

But since Saint Francis insisted, Brother Leo agreed to go. They walked the entire city, praying silently for everyone who was working in the shops and gardens. They smiled at the children, especially the poorest. They exchanged some words with the most elderly. They caressed the sick. They helped a lady carry a heavy container full of water.

After having traversed the entire city a number of times, Saint Francis said: “Brother Leo, it’s time to return to the monastery.”

“We did it, we did it,” answered the Saint, smiling.

The best homily is always the one made in flesh and blood. Jesus compared Christians to salt: “You are the salt of the earth. But if salt loses its taste, with what can it be seasoned? It is no longer good for anything but to be thrown out and trampled underfoot.” (Matt 5:13)

Saint Paul compares people to perfume: “Be the good fragrance of Christ” (2 Cor 2:14-15). Whoever wears perfume doesn’t need to announce it to everyone: the perfume will speak for itself.

Pope Francis has written: “I like to contemplate the holiness present in the patience of God’s people: in those parents who raise their children with immense love, in those men and women who work hard to support their families, in the sick, in elderly religious who never lose their smile. In their daily perseverance I see the holiness of the Church militant. Very often it is a holiness found in our next-door neighbors, those who, living in our midst, reflect God’s presence.” (Gaudete et Exsultate, 7)

Tenacious and courageous missionaries of the little ones

From the House-Shrine of our Mother, the Help of Christians, many have departed, as we already said, for every corner of the earth: 149 times in a span of 143 years.

After that first missionary expedition in 1875, Don Bosco sent another one in 1876, and then another in 1877 with the first Daughters of Mary Help of Christians, accompanied by the maternal blessing of Mother Mazzarello. These were young Sisters, between 17 and 25 years of age. During Don Bosco’s life, expeditions were sent in 1878, 1881, 1883, 1885, 1886, 1887, and 1888. By the time of our dear Don Bosco’s death, 149 Salesians and 50 Daughters of Mary Help of Christians had been sent into mission and were present in Argentina, Uruguay, Brazil, Chile, and Ecuador.

They are the courageous advance guard of our Family. There were not sent “to do” and “to do” and still “to do,” but to bring there a spirit, to widen the embrace of Don Bosco, the tender humanity of Mother Mazzarello, and the audacity of one who lives with a passion for the Gospel.

What I said to the new missionaries I now wish to say to all of you: “We wish that pastoral charity be the true center of your being and doing; that the Christ of the Gospel, loved and followed by Don Bosco and our saints, be truly at the center of your person; that you live with humility and intensity a filial sensus ecclesiae, predilection for the young, and the loving-kindness that is characteristic of our Preventive System, with our family spirit, untiring work, and temperance. Remain always in union with God, optimistic, joyful, creative, and flexible, and never, never forget that the embrace of our heavenly Father awaits us there where we will arrive, not alone but accompanied by the very many people for whom we will give our life.”

We have been called to witness to God’s presence in the world, with the unmistakable Salesian style: beginning from the ground up, from the littlest ones.

Professor Fernando Silva, who is the director of the pediatric hospital in Managua, has recounted a touching experience. One Christmas Eve he was working late. One could already hear the explosions of the rockets and see the flashes of the fireworks lighting up the sky when Fernando decided to make his way home, where they were waiting for him for the party.

While he was making his last rounds to make sure all was in order, suddenly he heard the noise of soft footsteps behind him – steps as soft as cotton. He turned and saw one of his little patients following him.

In that dim light, he recognized him. He was a child who had no one.

Fernando recognized that face that was already bearing the mark of death and the eyes that were begging pardon, or, maybe asking permission.

Fernando drew near him, and the little one caressed him with his hand: “Tell someone,” he whispered. “Tell someone I’m here.”

In a photographic exhibit of the street children of Lima, beneath one of the photographs the caption read: “They know that I exist, but they don’t see me.” I am a social problem, a statistic, but they do not see me.

We are Salesians, and wherever we find ourselves, let us listen to the voice of the forgotten, of the invisible. We are called to be tenacious and courageous missionaries for the little ones and the least. We are called to kneel to wash others’ feet, just as our Lord and Master had done.

Only he who lowers himself can listen – and listen, above all, to the little ones. They have something to say and a life to share.

Dear friends, you will encounter many persons of good will everywhere, some who do not think the way we do, who have other visions of the world, and who live and practice other religions. But if they are good and do good, they admire beauty and seek the truth. But you will also find much suffering caused by injustice, inequality, and violence, many times on the part of those who have power – whether it be political, social, or economic.

But you must always remain close to the poorest, most threatened, and neediest.

In regard to this, I would like to recall one of the “mementos” that Don Bosco himself wanted to hand on to the missionaries of the first expedition, 143 years ago, when the steamship Savoy was leaving port: “Take care of the sick, the children, the aged, and the poor, and you will gain the blessing of God and the good will of men.” And, on a card written to Father John Cagliero, he said: “Do what you can: God will do what we cannot. Entrust everything to Jesus in the Blessed Sacrament and to Mary Help of Christians, and you will see what miracles are.”