LET US LEARN TO LOOK “WITH THE EYES OF GOD”
Featured 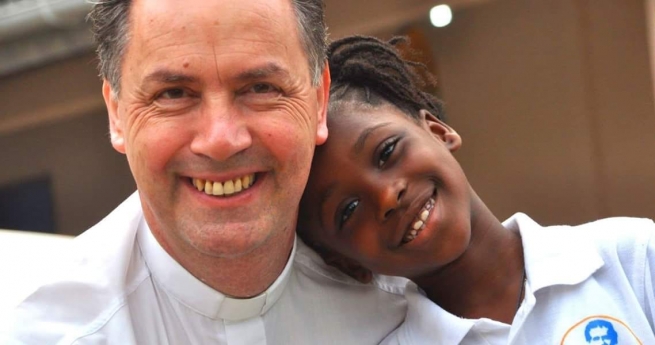 I met wonderful people and marvelous young people at World Youth Day. Because Pope Francis spoke about Don Bosco and his knowing how to see with God’s eyes during these Days that were broadcast via the internet, they sped around the world in a split second, are still on the Web, and will remain throughout time.

Personally, the story of one young woman’s life touched me deep down in my heart.  She was a young mom, who, due to a grave illness, imprisoned herself in her home for more than a year and a half.  She didn’t want to hear anything about anyone; she didn’t want to visit anyone or receive anyone’s visit.  As far as she was concerned, her life was over.

Those who loved her invited her to go to the Salesian house nearby.  After being forced a bit and with not just a little resistance, she eventually went, and from that day forward up until today, many years later, she has never left this Salesian presence.  I met her there.  I came to know her there.  I never could have imagined even for one minute how great a struggle and how many personal battles she had to face to survive.  Her energy, her leadership, her ability to involve others and herself in things, would’ve led me to think that hers was a life that was always growing and overflowing with good results and success.

That wasn’t the case.  Then she was given that magnificent opportunity.  With a bit of fear and trembling, she timidly approached and met persons who “knew how to see with God’s eyes” without asking for anything.

In the same way, I listened to the testimonies of dozens of young people during World Youth Day and the wonderful celebration of Don Bosco’s feast day in Panama (with the most multitudinous procession that I’ve ever seen in my life).   These young people recounted so many more stories from their lives of how they were looked upon with a “special” gaze – that of the Lord.

Pope Francis put it beautifully during the Vigil on Saturday when he stated that “embracing life is also seen in accepting things that aren’t perfect, pure, or ‘distilled,’ yet no less worthy of love.” This is what makes the difference in the way in which we treat each other as persons.

We know, and many of us are convinced of this, certainly many of you – dear friends – that “love heals.”  Love is curative.  Only the one who is loved can be saved.  Well, then, precisely because of this, the first step that we must undoubtedly take as educators and friends in our Salesian way, or simply as persons of good will who live in this world, is “not to be afraid to welcome life as it comes, … to embrace life as it is” (Pope Francis at the Vigil).

That young mother of whom I spoke at the beginning of this letter needed only to find a life-giving place to be, a place among people, where with her hands, heart, mind, and body she could feel she belonged and was “a part of something else,” of a much larger “community” that needed her, just as she was, with her life story.  Finding such a place changed her life.

Pope Francis said much about Don Bosco during that Vigil at World Youth Day.  His words filled me with emotion and were even quite demanding because we weren’t able to listen to them and remain indifferent since fidelity to Don Bosco today means making the same choices and the same decisions that he did and that he would make today.

The gift of roots

“Saint John Bosco,” said Pope Francis, “didn’t go off to seek young people in far-off places (let’s see – those here who love Don Bosco, an applause!)…  Don Bosco didn’t go off to seek young people in far-off or special places; he simply learned how to see with God’s eyes everything that was going on around him in his city.  Thus he was deeply affected by the hundreds of children and young people left to themselves, without education, without work and without the helping hand of a community.  Many other people were living in the same city, and many criticized those young people, but they were unable to see them with God’s eyes.  We need to see young people with God’s eyes.  Don Bosco did, and found the energy to take the first step: to embrace life as it presented itself.  From there, he wasn’t afraid to take the second step: to create a community, a family, with them, where through work and study they could feel loved.  He gave them roots from which they could reach up to heaven – so that they could be someone in society.  To give them roots to hold onto and help them stand securely when the first stormy winds come their way.  That is what Saint John Bosco did….”

These things and much more from those days left their impression on me.  They’ve filled my heart and my soul with many faces – just as the great bishop Pedro Casaldáliga said when he was drawing near death and imagined himself standing in God’s presence, where they asked him what he’d done in his life.  He presented his hands empty, but his heart filled with names.

My friends, “The salvation God offers us is an invitation to be part of a love story interwoven with our personal stories. It’s alive and wants to be born in our midst so that we can bear fruit just as we are, wherever we are, and with everyone all around us.” (Pope Francis)