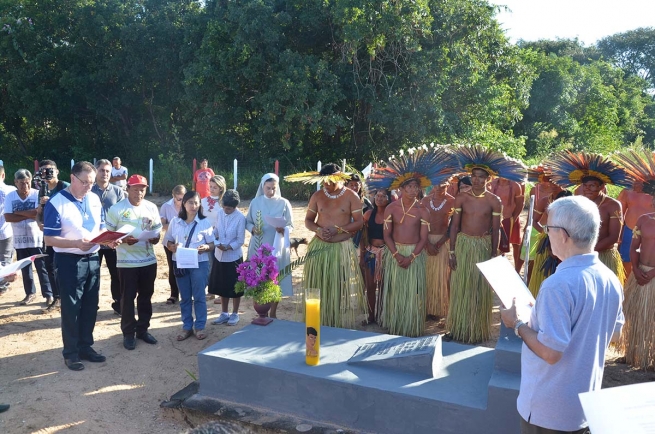 It was very moving for me to meet with Bororo and Xavante youth joined together in this land where the Bororos live, to meet the missionaries who share day-to-day life with them and to celebrate our Faith right on the spot where our martyrs met their deaths.

You are probably asking what I mean by the title given to this letter and what topic I wish to speak about. I understand your wonder. So as to dispel any doubts, I shall begin by sharing with you what I experienced during one of my latest visits to our Salesian presences.

Not too long ago, I was visiting and accompanying the people in the Salesian works in Mato Grosso and Southern Mato Grosso in Brazil – specifically in the tiny village of Cuiabá – where our first Salesian missionaries arrived 125 years ago. Today it is a very beautiful little town.

I told my brother Salesians that, just as I had done in El Chaco, Paraguay, I wanted to visit our work among the indigenous peoples in Mato Grosso, where we have been among the Ayoreos, the Maskoy, and the Chamacocos for decades. I also asked to visit our missionary presences in Mato Grosso. We arrived in Meruri, the settlement of the indigenous Bororo people, around dusk.

In 1894, our Salesian missionaries made their first contact with the Xavantes Indians of the area. That first encounter was a sad one. The indigenous people killed the first two Salesian missionaries to arrive. Nonetheless, the missioners soon founded Sacred Heart Colony and began the evangelization of the Bororos living in this region. In 1906, they founded the Sangradouro Colony. It was to this colony that the Xavantes came after having been expelled and almost annihilated by Parabuburi of the area.

By 1926 the Salesian missionaries had continuous, stable, and solid presences in those settlements among the Xavante and Bororo peoples. Our works, such as Sangradouro, St. Mark, and Meruri have been strengthened right up till the present. When the Xavante Indians arrived at the Sangradouro settlement – where they were welcomed by the Salesians and the Bororos (even if they had been enemies throughout their history) – they numbered but 900 members. Today, thanks to the protection given them and today’s respect for cultures, in addition to formation to enable them to work with and begin relations with organizations and governments, they now number 30,000.

The people of Meruri welcomed us in their traditional style. Certainly, you can see this from the pictures. I used as much of the time as possible to meet with all the missionaries who live among these peoples at present: 18 Salesians of Don Bosco and 8 Daughters of Mary Help of Christians were there along with two religious sisters from the Congregation of St. Laura (known as the “Lauritas”), Colombian sisters with whom we work very harmoniously for the good of these native peoples, our brothers and sisters.

The following morning we experienced two events of great historical significance. The first: 40 Xavante boys and girls came to join the Bororo people for the day because we were there. Never before had the Bororos and the Xavantes come together like this. The Boi Bororos and Xavante youths made possible what the adults never had been able to do before in their history: we met together, chatted, and entertained various questions; they did their traditional dances; we celebrated the Eucharist; and we had all our meals together – a few hundred persons.

The second significant event was that we celebrated the Eucharist in the very place where  Salesian Father Rudolph Lukembein, a German missionary, and an Indian, Simao Cristino, were assassinated by os facendeiros; i.e., powerful landowners who were upset because the Salesians defended the native peoples and their rights to the land. On July 15, 1976, these landowners came to the settlement and, after a short argument, shot Fr. Rudolph. Simao, the indigenous man, went to defend him, and he, too, was executed.

On the day of my visit, I was able to greet, speak with, and enjoy the presence of an elderly man who also had been stabbed then but managed to survive. He was there in the morning for our Eucharist, a humble presence.

The cause for the beatification and canonization of these two martyrs is now underway; both are now “Servants of God.”

It was very moving for me to be there where the Bororos live and to meet with the Bororo and Xavante youths who had asked to be together for this occasion. I also was moved to meet with the missionaries who share life day-to-day with these peoples and to celebrate our Faith there where the martyrs met their deaths only because they sought to help better the life of these peoples and who had their lives stripped away from them only because they sought to defend them.

Early the next morning, again together with the Bororo community, we made a short procession and visit to the cemetery at the settlement. There, at the tombs of Simao and Fr. Rudolph, we prayed for everyone.

My thoughts flew from there to Africa to the border of Burkina Faso and Togo, where our Salesian confrere Fr. Cesar Antonio Fernandez, a missionary from Spain, had his life cut short just a little more than two months ago at an absurd border roadblock. It was one of the most senseless shootings by radicals, simply because he was a priest and missionary.

I hope that the title of this letter is a just response to these two stories. Blood poured out brings forth so much anguish but also generates life. I saw this among the Bororo and Xavante peoples, and we see it in Africa, where “life miracles” happen daily.

These few lines hope to be a “thank you” for the so very many dedicated persons of boundless generosity. It is also meant to be a thank you to so many of you, dear friends and readers, who continue to trust in the good which we do together in this world – this world that never ceases to need good things and good news to cheer the heart, and actions that change lives. Indeed, not everything that happens in this world is bad. On the contrary, the world has been redeemed, and there is so much good that is sown and happens each day – but the good doesn't make news. It seems that only evil, tragedies, violence, and murders do.

Then let us be people who spread good news. The last thing I want to share with you is this: despite the suffering and pain in the face of these murders, they are realities that bring forth life.