THE DANCE OF THE BRONZE CHILDREN
Featured 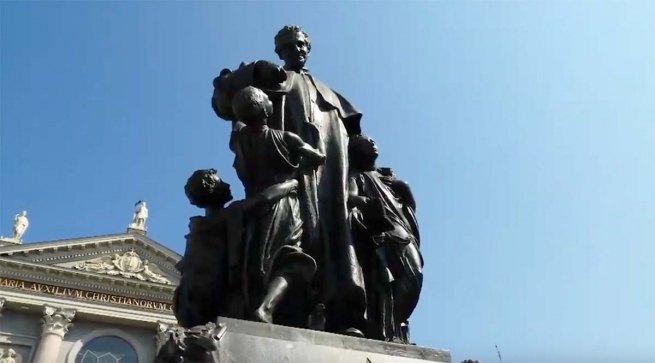 The monument to Don Bosco in front of the Basilica of Mary Help of Christians in Valdocco is a symbol of the Salesian mission in the world.

I greet you from Dimapur, Nagaland, in the Northeast of beautiful India, on the border with other nations.  Here the Salesian presence has sunk deep and most beautiful roots of great fidelity to Don Bosco.

Indeed, while reflecting on the extraordinary scenes of welcome that I have experienced throughout the whole world, a symbol of love and gratitude comes to my mind: the monument to Don Bosco which his friends wanted to erect to him right in front of the Basilica of Mary Help of Christians.

Within a few months, we will celebrate its hundredth anniversary.  It has worn well, and like a faithful guardian welcomes all who enter the motherhouse.  As often happens, we become so accustomed to seeing it that perhaps we give it only a very quick glance and just keep going.

To think that the idea of a monument in this piazza had come from the mind of Don Bosco himself!  One day, when they had already begun to construct the Basilica of Mary Help of Christians, while Don Bosco was crossing this piazza, which was then still but trampled earth, he stopped to contemplate the outline of the façade that was going up, and then he looked around.  With that glance of a dreamer and the decisiveness that was typical of him, he said to the priest who was accompanying him: “Here in the middle I would like to put a monument to Moses as he is striking the rock, and have gush from this rock a stream of water to be collected in a basin.”

Today, there is a monument in the middle of the piazza.  It is not exactly what Don Bosco had imagined, but it expresses something even more

The epic of Salesian ministry

On September 10, 1911, the idea for a monument to Don Bosco on the anniversary of the first centennial of his birth exploded during the International Congress of the Past Pupils.  Many persons from all over the world joined in the project immediately.  The municipality of Turin gave them the space and made a little contribution.  A contest was held in which artists from all over the world participated.  The plan that was chosen was the one that sculptor Gaetano Cellini of Ravenna presented.

Everything was ready, but the terrible First World War made them postpone the inauguration, which took place at last at 11:00 a.m., on May 23, 1920, vigil of the feast of Mary Help of Christians.

When the cloth covering the monument fell, the thousands of persons present broke into devoted and moving applause.

Struck in bronze and placed atop a robust granite pedestal is an epic outline of Salesian ministry.

On top, the meek, smiling figure of Don Bosco is surrounded by a crowd of children who seem to dance around him.  Don Bosco makes a very expressive gesture which seems to say that he wants to lift up one of the children.  It is a magnificent symbol of his mission and that of the Congregation: the word to educate means, precisely “to pull up,” to elevate, to make grow.  The tone is joyful, which is a certain characteristic of Salesian spirituality whereby the climate of friendship that exists between the educator and the youth is of great help for personal growth.  Within the tradition of St. Francis de Sales, growing in faith, even with a guide, would not be possible if there were no true friendship, communication, and reciprocal influence.  It is a friendship which reaches the heights of spiritual friendship.  The rapport between the Salesian formator and the young has to be imprinted with “the greatest cordiality,” because familiarity brings love, and love brings confidence.  The children look up at Don Bosco with trust because they are certain that they are loved.

Below, a magnificent group represents humanity, bending to kiss a cross presented to it by Faith.  “In the beginning our Society was a simple catechism lesson,” stated Don Bosco.  This phrase brings us back to the origins and roots of the Salesian Congregation.  From Don Bosco we learned that evangelizing passion for bringing every child, every person, to an encounter with Jesus.  On the two reliefs in the front can be seen, on the right, a mother with a little boy in her arms who sends kisses up to Don Bosco, and on the left a poor leper who looks gratefully at his benefactor.

On the two sides, two of the “holy loves” promoted by Don Bosco, the Eucharist and the Help of Christians, are fused in the idea of the mission ad gentes and in that of the family.

On the back portion, three bas-reliefs record how much the Salesians have done and are doing in the assistance of immigrants – both those of yesterday and those of today.  I think of how many Salesian houses around the entire world have opened their doors for migrants of every age.  I think of the refugee camps and of the group homes.

On the sides are pictured the Salesian technical and agricultural schools.  Each day, thousands of young people enter our houses to become “good Christians and upright citizens.”

As if by a mirror trick, directly behind the figure of Don Bosco, in the center of the façade of the Basilica, the statue of Jesus with the children stands out prominently.  “Let the children come to me, for to such as these, in fact, belongs the Kingdom of God”  (Mark 10:14).  All around the world I have seen the sons of Don Bosco make Jesus’ words come true with unchanged passion.  That is why today new missionaries still depart from this place.

Above all, I have felt the infinite gratitude of innumerable men and women for what they have received in Don Bosco’s name.  Whenever I arrive in a Salesian house, in any nation of the world, it seems that I see again surrounding me that circle of children on the monument, with their joy fulfilled, something which I wish for every one of you,