A MISSIONARY DREAM THAT LIVES ON
Featured 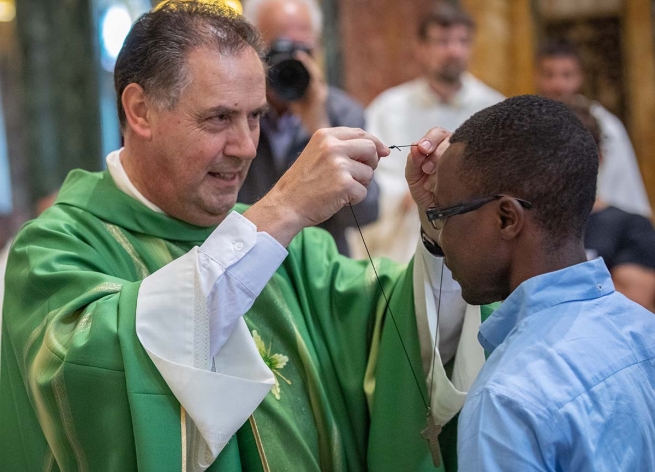 The dream to which I refer, my dear friends of the Salesian charism, is the great missionary dream of Don Bosco. Even in the very first years of the foundation of the fragile, little Society of St. Francis de Sales (the Salesians), he sent out his first missionaries to Argentina (in the year 1875) with the intention of caring for the Italian immigrants who had reached those shores by the thousands.

Profound, also, was his desire to evangelize the native peoples of Patagonia as soon as possible. This same Don Bosco also saw the development of the mission and the extension of the Congregation from Valparaiso, Chile, to Peking, China, in one of those great missionary dreams.

That missionary dream lives on. Indeed, it’s very much alive and, no doubt, if Don Bosco were physically present among us, he would feel very happy. He would say as much, seeing how these two great congregations, the Salesians of Don Bosco and the Daughters of Mary Help of Christians (the latter founded with the help of the great co-foundress St. Mary Domenica Mazzarello) not only continue to be missionaries but have continued without interruption from the first missionary expedition which he prepared. Many others have followed – this year reaching a count of 150.

This past September 29, during a most beautiful celebration of the Holy Mass in the Basilica of Mary Help of Christians, the missionary crucifix was bestowed on 36 Salesians and 12 Daughters of Mary Help of Christians who are destined for four continents. There was great joy and a tangible feeling of celebration and of family. More than 100 priests concelebrated and many FMA and SDB Religious were present with young volunteer missioners and a great many members of the Christian community of Valdocco who accompany so many of these Salesian events.

In my homily, I was able to share a fact that is very curious but one that is of greater charismatic identity and value. I said that in the Missions Dicastery we SDBs have a book in which are registered the names of all the missionaries who have been sent in these 150 expeditions, beginning with the very first, Father John Cagliero. The total number of SDBs to date listed in that record is 9,542 missionaries since the year 1875. But, we know that thousands of others have been sent under different circumstances without having received the missionary crucifix in Valdocco. I do not know the number of our FMA Sister missionaries, but without a doubt they number in the thousands. So, does there exist any doubt about the missionary charism of the two congregations whose existence Don Bosco willed? No such doubt exists. We were born as Religions Priests, Brothers, and Sisters for youth, for the world’s little boys and girls, for the poorest and neediest among them; but we were also born to be missionaries and evangelizers wherever we’re needed.

Our Sisters and Confreres who received the cross in Valdocco in September know this very well, as missionaries of Jesus wherever they’re needed.

This certainty draws from my heart so many faces and so many names of missionary Confreres and Sisters whom I have encountered around the world in these almost six years, always in the midst of the poorest and humblest on the six inhabited continents; always sharing their life and learning, and giving what they have and can give.  They announce Jesus with their words and much more often without their words because they can’t speak freely, except with their lives, giving exemplary witness, simply and quietly living the Gospel in their daily lives.

All the Sisters and Confreres today are missionaries who have made and can continue to make those dreams come true, the great missionary dream of Don Bosco. I am certain that this dream is alive. I almost dare to say that if we’re faithful to Jesus in his Gospel with the charism of Don Bosco, this dream will have only just begun.

Our Sisters and Confreres continue today to be missionaries throughout all the Americas, in the Amazon and the Andean cordillera; in Africa; in Eastern Europe; in Mongolia, Nepal, and so many other places in Asia; as well as in almost all of Oceania. Still, we continue to receive petitions from all these places for the presence of Don Bosco’s Daughters and Sons.

I wish to conclude my greeting this month by thanking so many of you for your generosity, our dear lay friends who continue to trust in us the Salesian Family, which intends to contribute its little grain of sand in the Church in the world today. Thank you for your affection, your sympathy, and your generosity when we’ve been in need for the sake of the poorest. Together we reach further and many more. May the good God bless all of you.