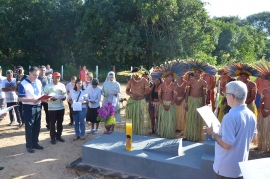 BLOOD POURED OUT BRINGS FORTH LIFE

It was very moving for me to meet with Bororo and Xavante youth joined together in this land where the Bororos live, to meet the missionaries who share day-to-day life with them and to celebrate our Faith right on the spot where our martyrs met their deaths. 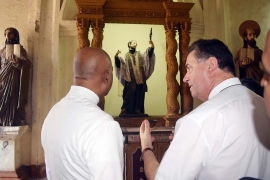 THE HOLY SPIRIT IS STILL AT WORK

ST. FRANCIS XAVIER AND DON BOSCO. TWO GREAT MISSIONARIES YESTERDAY AND TODAY .  Just a short while ago I was in Goa, India, where I saw how amid the palm trees and the fine sand of the sea there rise up cathedrals and churches built during the 16th and 17th centuries. One of these shrines is the Basilica of the Good Jesus, which has become a site for pilgrimages, especially for Christians but also for believers of other religions, because here lie the remains of St. Francis Xavier, the missionary from Navarre who evangelized the Far East and was a disciple of St. Ignatius of Loyola, the founder of the Jesuits. Even though St. Francis Xavier died in China in 1552, his remains rest in this most beautiful basilica situated next to the cathedral and to the church of St. Francis of Assisi. This place in which his mortal remains rest was erected between 1594 and 1605. His body is conserved there. Its incorruptibility was the miracle for which St. Francis Xavier was canonized in 1622. Accompanied by other Salesians and some lay persons, I had the privilege of celebrating Holy Mass on the altar at the tomb of this great and holy Jesuit missionary. 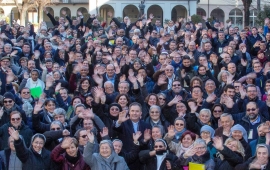 THE BEATITUDES OF THE SALESIAN FAMILY

In January we celebrated the Salesian Family Spirituality Days with people from 28 nations. These are formation days for the entire Family that have been held for the last 37 years; they become more significant each time. Just as was the case last year, the Days took place in Valdocco, in Turin, i.e., in our Salesian holy places. These are sites filled with the Holy Spirit, where everything speaks to us and reminds us of Don Bosco and the charism which he received from that same Spirit in behalf of the boys and girls, teenagers, and young adults of our world.

LET US LEARN TO LOOK “WITH THE EYES OF GOD”