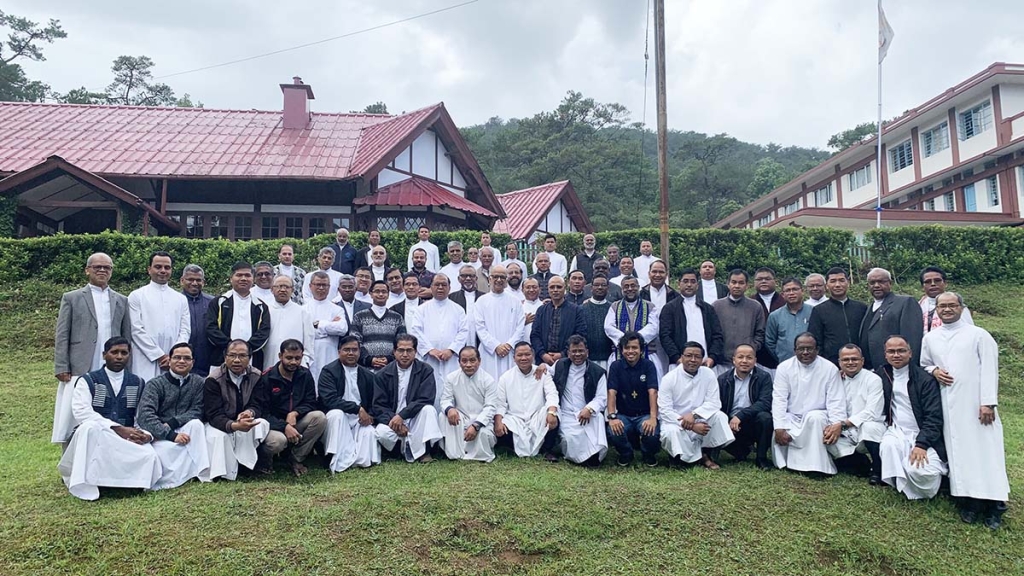 Shillong, India - 10th May 2022 - The 4th Provincial Chapter of St. John Paul II, Shillong Province began with the Morning Prayer animated by Fr. Christopher Warlarpih SDB and the Holy Eucharist presided over by Most Rev. Victor Lyngdoh DD, Archbishop of Shillong and concelebrated by Fr. Biju Michael SDB, the Regional Councillor for South Asia, and other priests of the chapter.

The inaugural function began at 8:45 am with a hymn to the Holy Spirit (Veni Creator Spiritu) intoned by Fr. Gabriel Colney. Thereafter, the moderator Fr. K.J. Anthony SDB, invited the guests to light the lamp which was followed by the opening prayer and the Bible reading by Fr. John Zosiama SDB, the Vice-provincial. The moderator then accorded a warm welcome by presenting them a Risa (Tripuri traditional muffler) and a flower pot each by appointed members of the chapter Most Rev. Victor Lyngdoh, Archbishop of Shillong, Fr. Biju Michael, Regional Superior for South east Asia, Sr. Elizabeth George FMA, Provincial of Shillong, Sr. Elizabeth Mao, the delegate of the MSMHC, Mr. Valerian Pakma, President of the Salesian Past pupil’s Federation of Shillong Province), Ms. Binita Marbaniang, the President of the Salesian Co-operators of Shillong Province who were present for the inaugural function.

Fr. Biju Michael, the Regional Councilor for South Asia started his message by first and foremost conveying the greetings from Fr. Rector Major and the Vicar-general of the congregation. He wished all the chapter members best of luck and God’s blessings upon each member. Quoting article 170 of constitution of the Salesians which spoke about the provincial chapter as a fraternal gathering. He said that the province community is a religious community and a community of faith brought together by the initiative of Jesus. He continued saying that just as Jesus substituted his natural family with his followers, we also substitute our natural family with our province. While quoting GC 28, he highlighted the importance of sequella christi in which we need to always return to Jesus and renounce everything that is not of our interest and mission. He also warned against activism and corporate mentality. The moderator then thanked Fr. Biju for his message to the chapter members.

His Grace Most Rev. Victor Lyngdoh DD, the Archbishop of Shillong said that it is significant that this chapter is taking place when the universal church is making its own Synodal journey. The chapter itself is and should be an occasion for genuine experience of synodiality- of walking together and listening to each other wherein the synodal experience of communion and participation will bring about a common mission. The Archbishop suggested and proposed a few points in order to make the chapter a fruitful one. The points are: 1. To have a well-defined and comprehensive plan, 2. To opt for the young who are poor, 3. To form upright citizens and good Christians, 4. To interlink between Salesian charism, youth ministry and faith formation, 5. “The poor youth” as lifeline of the congregation, 6. Ministering to the young to the new peripheries, 7. To have a good collaboration and networking.
Sr. Elizabeth George FMA, the Provincial of Shillong Province addressed the chapter members through her message by saluting the pioneers and early missionaries who worked with unmatched passion indomitable courage and focused vision. She highlighted the need to look after the youth who can be the architects of change in our era, inviting the Salesians to continue to work with them, to believe in them, to invest in them and to discover with them new and innovative ways of perpetuating the spirit and charism of Don Bosco.

Sr. Elizabeth Mao, MSMHC who represented the Provincial Sr. Maria Goretti S. Sangma, MSMHC of Shillong Province, began her message by thanking Fr. Provincial and the moderator for inviting her to be part of this chapter. She too conveyed the greetings from the Provincial Superior of the MSMHC Shillong province. She said that it was an apt theme brought to discussion as many young people are going astray from the church and families perhaps due to lack of guidance from their parents and elders. She exhorted the Salesians that they should be committed to the cause of working for the young people. ‘You are called to work with them, accompanying and enlightening the young to realize their worth, to give them a lasting sense of fulfillment in their undertakings, to gain new strength and hope to actualize their dreams’ she said..

Ms. Benita Marbaniang, the Provincial Cooperators, Shillong Province, began her address by thanking all for inviting her to be part of this function. Her message was very short and sweet and yet focused more on the fatherly figure of the Salesians towards youngsters. Mr. Valerian Pakma, the President of the Provincial Federation of Past-pupils, Shillong Province exhorted everyone to recognize the past-pupils, involve them, give them activities, responsibilities, animate them so that the mission of Don Bosco will continue. The message from Sr. Biolinda Jyrwa VSDB, the mother General of the VSDB congregation, who was unable to be present due to earlier commitments was read out for the chapter members by the moderator.

After all the messages were delivered, the climax of the inaugural function was the declaration of the 4th Provincial Chapter of St. John Paul II, Shillong Province 2022 open by Fr. Paul Olphindro Lyngkot SDB, the Provincial in the presence of the all the chapter members and other dignitaries.

The inaugural function ended with the launching of Province Mobile application by Rev. Fr. Biju Michael SDB, the Regional Councillor for South Asia in the presence of the all the chapter members. Fr. Michael Makri SDB, who developed the App, also explained to all the members present for the chapter the details and the functioning of the mobile application. It was well appreciated and congratulated by all.