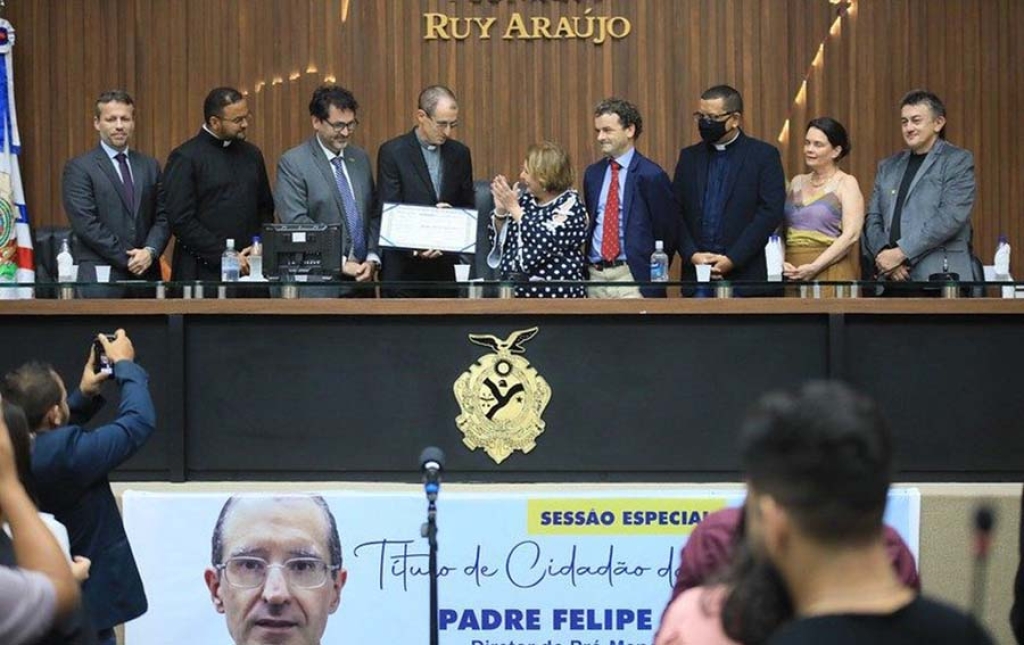 Manaus, Brazil - May 2022 - On May 13, the Legislative Assembly of the State of Amazonas held a Special Session to confer the title of "Amazonian Citizen" to Fr Felipe Bauzière, SDB, Rector of the work "Pró Menor Dom Bosco," Vicar of the Salesian Province of Manaus (BMA) and Provincial Delegate for Formation. The granting of the title was unanimously approved by the state parliament. Born in 1968 in Tournai, Belgium, Fr Bauzière arrived in Brazil nearly 30 years ago with the goal of working in Salesian missions in the Amazon. "Don Felipe donates his time and his life in favor of young people. He carries out the work in a very discreet way and, at the same time, with a strong presence," said Congresswoman Therezinha Ruiz, during the tribute to the Salesian missionary. Citizenship, according to the congresswoman, is a way to recognize not only the work and dedication of Fr Felipe but of all Don Bosco Salesians. Fr Felipe commented, "Now, with the official title of Amazon Citizen, I feel more comfortable. I am really at home." Present at the special session was the ambassador of Belgium, Patrick Herman, who recalled that one of the missions of the Salesians and in particular of the work "Pró Menor Dom Bosco" is education. The institution offers vocational and social courses attended by about 1,100 pupils among adolescents and young people in socially vulnerable situations. "Thousands of lives have been transformed by the work, dedication, and personal effort of the Salesians, and in particular Father Felipe," the ambassador said, concluding that this is a source of great pride for the entire Belgian community in Brazil.