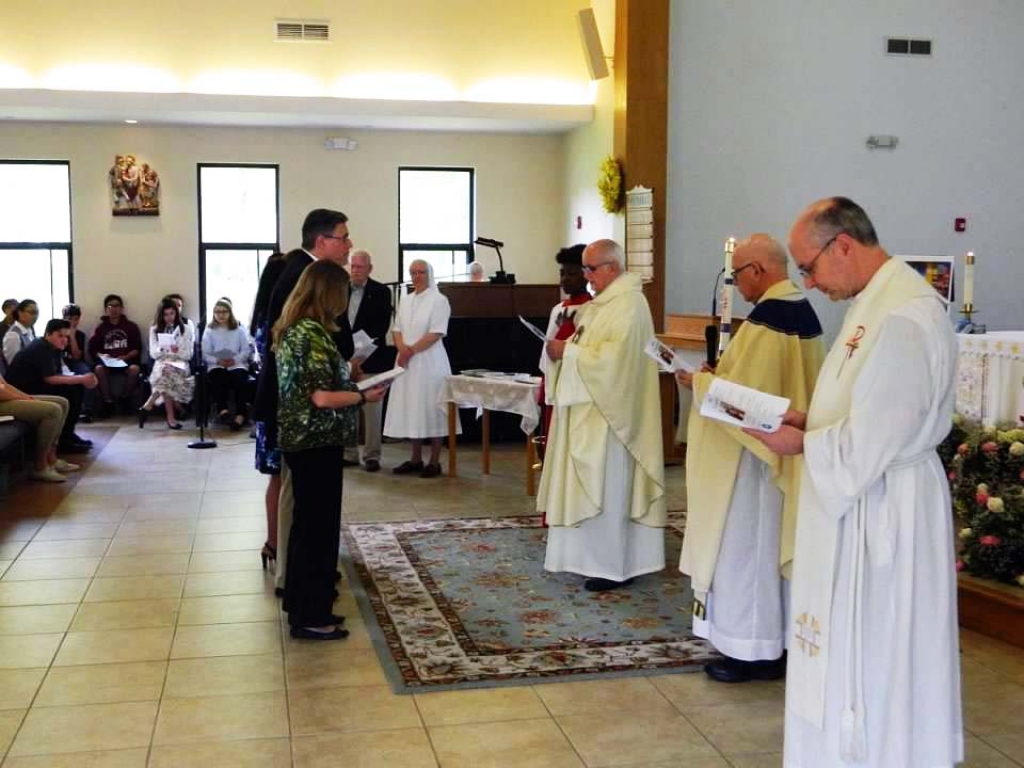 Haverstraw, United States - May 2019 - Close to 400 members of the Salesian Family gathered at the Marian Shrine in Haverstraw, N.Y., on Saturday, May 25, to celebrate the feast of Mary Help of Christians, the 150th anniversary of the Association of Mary Help of Christians (ADMA, founded by Don Bosco in 1869), and their fellowship in the Family. Groups taking part included SDBs, FMAs, Cooperators, ADMA, DBVs, and young people. Youths from the Salesian presences in Hawthorne, New Rochelle, North Haledon, Orange, and Ramsey presented skits about Don Bosco and the Salesian Family. Talks were given on ADMA and on Mary. In one talk, Fr. Pat Angelucci recounted how Don Bosco had placed a statue of Mary Immaculate atop the dome of the church of Mary Help of Christians in Turin to act as a lightning rod, and he affirmed that Mary is our lightning rod, our protector. He continued by describing authentic Marian devotion, according to Don Bosco, as practical, Christocentric, traditional, and complete—going into some detail on each point. The sacrament of Reconciliation was offered at two times during the day, and a good number of pilgrims took advantage of the opportunity. There was also about an hour of Eucharistic adoration. Including regular attendees of the Shrine’s noon Mass, the chapel was filled to capacity (about 450)—standing room only. Fr. Tim Ploch presided and preached (in both English and Spanish). Fr. Tim’s homily described how the Virgin Mary shows the way to holiness (“Holiness is for you too”) and accompanies us on the way—just as she did John Bosco all his life, starting when he was nine years old. He named three ways that Mary does this.

1. Mary teaches us to listen to the Word of God and to allow it to have an effect on us, to be the sole determinant of our lives.
2. Mary is the woman of family, the mother given to us by Jesus at Calvary and going with her children into the Upper Room to wait for the Holy Spirit, who binds the family together.
3. Mary is the woman of service, rushing to the aid of her cousin Elizabeth, coming to the assistance of young couple in trouble at their wedding (the day’s gospel reading was that of the wedding at Cana), always sensitive to our needs and problems.

Fr. Tim said that Mary is a living presence who shows the Salesian Family how to be present to the young and urges us, as she did the servants at Cana, to do whatever Jesus tells us.
In conclusion, Fr. Tim reminded the congregation that at the Eucharist Christ works a greater miracle than he did at Cana, changing bread and wine into his own Body and Blood. Our participation in this Sacrament unites us not only with him but also with his Mother and all the members of the Salesian Family. At the end of Mass four Salesian Cooperators from the Ramsey center made their promises. The day ended with a Rosary procession—the decades prayed in 5 languages—and the crowning of the statue of Mary, with a major assist from the Stony Point Fire Department.