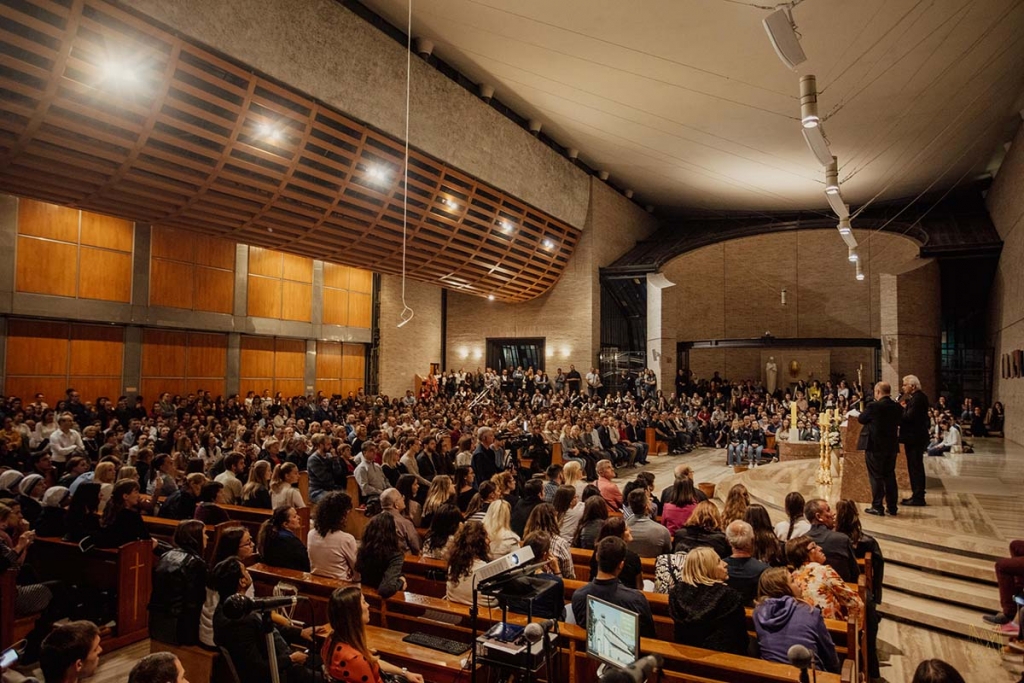 Fr Tom was sharing his experience about the terrorist attack he survived in Yemen in March 2016; he was seized and held hostage by terrorists and wasn't relased until September 2017.

A large number of people gathered in every place Fr Tom talked about this incident. While witnessing to hundreds of people in Žepče, Međugorje and then Split, in Zagreb, the capital of Croatia, a few thousand people gathered. On Sunday, Fr Tom celebrated Holy Mass at Mary Help of Christians at noon and in the Mater Libertatis sanctuary where, after evening mass, he talked to a crowd of around 2000, mostly young people.

Fr Tom presented the country of Yemen, its history and the history of missionary work in the Gulf state. After he saw that ISIL members killed four sisters of the Missionaries of Charity and people who worked in their city of Aden center he was sure he would also be killed. But the terroists took him away and kept him for a year and half. Although he had diabetes and lost weight, he was relatively in good physical and mental condition. He prayed every day for the victims of the attack and the terrorists who killed them. He had 'spiritual' Holy Mass each day. The day after he was released, he met Pope Francis in Rome.

In each of his speeches, Fr Tom expressed three important messages: “the first message is that God is allive, very present in our lives and prayer is a very powerful tool. The second is that the gift of forgiveness is the best medicine that God gave us. And third message is that everyone of us is having his special mission. We will discover that mission in prayer and silence because then we can feel and hear what God is telling us.”

On Monday, Fr Tom and the Salesian publishing house Salesiana promoted the book entitled By the Grace of God, which was in Croatia re-titled: Miraculously alive: 557 days in the hands of ISIL.

During the promotion, Fr Tom said, “I see that people in Croatia have great grace and that Our Lady is especially close to them. It is wonderful to see everyone in church: parents with children, older and younger people, and all of them going to communion. That is a great grace that you are receiving from God. God is with you and you are with Him. Lord gave you also a wonderful country and people who are caring and kind.”

Fr Tom also added: “Your prayers were my 'insulin'. It is because of your prayers that I returned without any serious health problems. I don't want to be seen as some kind of a hero.”

His final apperance was on Monday evening when he listened to the testimony of Croatian veteran soldier Stipo Mlinarić who fought in the Croatian War of Independence (1991-1995). Fr Tom again mentioned “the importance of forgivness to the ones who made evil to us.” The evening was closed with adoration and prayer.