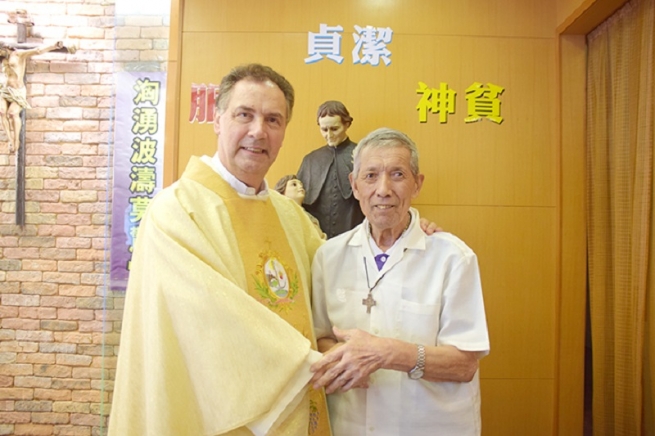 (ANS – Hong Kong) – Salesian Brother Paul (Paolino) LIN Yin-nien passed away at the age of 92 years on 10 March 2020 at 13:30 in the hospital in Shanghai, China, after 70 years of Salesian consecrated life. He was born in Shanghai on 16 July 1928 and made his first profession in Hong Kong on 16 August 1950, and his perpetual profession on 24 January 1958. He spent 37 years in detention (15 years in prison, 22 years in a labour camp) for his Catholic and Salesian fidelity to the Pope as the Vicar of Christ. So many years in prison did not stop him from witnessing, always with a joyful and enthusiastic lifestyle, that Jesus is alive!

The CIN Province is mourning, both sorrowfully and joyfully, the death of Br. Paolino Lin Yin Nien. Why sorrowfully? Because it was the hope of us all to have Br. Paolino with us for some more years before his return to the Father’s House. Why joyfully? Because Br. Paolino’s death crowns a life that has been a spendid, as the Provincial announcement of his death termed it, “example of fidelity to God, to the Church, and to Don Bosco.”

Born in 1929 in Shanghai, he professed as a Salesian in Hong Kong in 1950. Though tall and stout, Provincial Fr Carlo Braga liked to call him “Paolino”. Even though Shanghai was no longer free, he, only temporarily professed, readily accepted the tremendous obedience, given him by the Servant of God Fr Carlo Braga, of returning to Shanghai to help the confreres there, trying to salvage Salesian work for poor youth.

On 8 September 1955, Feast of the Nativity of Our Lady, he was arrested for his fidelity to the Pope along with the Bishop of Shanghai and a thousand other religious, priests, and faithful. On that day, he told us, he made the vow of reciting the Novena to Mary Help of Christians penned by Don Bosco every day: in return, he asked Our Lady to give him the grace of being able to make his perpetual profession and to remain faithful to his Salesian vocation until his death.

For the last 65 years, to his dying day Br. Paolino kept up his daily recitation of the Novena prayers. Of these 65 years, 35 were passed in prisons and in labour camps. Even if from time to time he was allowed some short visits to his brother Salesians abroad, most of the other 30 years were passed under police supervision in what was practically an ongoing house arrest. Br. Paolino was the last remaining “confessor of the faith” in the great motherland. He could have passed his last days in the freedom of Hong Kong or Taiwan, but - with the consent of his Superiors - he chose to remain where he was, dedicating himself to the youth and the children of the neighborhood.

Only some months ago it was revealed to us that the family of Br. Paolino Lin was related in a very special way to the great CICM Missionaries in Sinis. The revelation was made to us by the Pastor of the Martyres Sinarum Parish in Taipei, Fr. Willy Ollevier, CICM. On 25 August 1865, CICM Founder Theophiel Verbist set out on his journey ad Sinas in the company of four companions: Fathers Aloïs van Segvelt, Frans Vrankx, Ferdinand Hamer, and lay helper Paul Splingaerd. Br. Paolino Lin Yin Nien and his elder brother former Salesian Fr. Mattia Lin In Ts’ing are descendants precisely of Paul Splingaerd, that young lay missionary volunteer who, in Chinese, chose to call himself “Lin Fu Chen”. He eventually married a local lady, Catherine Tchao Li, with whom he begot 12 children, 9 daughters and 3 sons: Alphonse, Remy, and Jean Baptiste. These three sons carried the Lin/Splingaerd name. One of them was the father of our two confreres. The Wikipedia article about Paul Splingaerd (Brussels, 1842 – Xi’an, 1906) says that he was a Belgian foundling who followed the first CICM missionaries and who eventually became an official or mandarin (bureaucrat) in the late Qing Imperial Government.

Now we know why Br. Paolino was so tall and stout. He had good Flemish blood in his veins. But tall and stout he was not in body only, but also in his soul. He passed the last 30 years of his house arrest in the company of Our Lady of Sheshan (Help of Christians!) and of Jesus in the Blessed Sacrament, whom the Superiors allowed him to keep in his home in downtown Shanghai. When not playing host to the children who came to see him, Br. Paolino, a true Salesian contemplative in action, lived in uninterrupted contemplation of the divine love incarnate in Jesus, crucified and risen, mysteriously present in the consecrated Host.

During the last few years, the CIN province Salesians recorded various interviews with Bro. Paolino. In one of them he shared: “When I was arrested for the first time, I was a coadjutor brother with only temporary vows. After a few months, I was released for ‘holidays’. I was sure that I would be arrested again. So, during my ‘holidays’, I asked the Superior in charge, Fr Liang, to allow me to make my Perpetual Profession as an exception, for I didn’t want to die as a non-Salesian. With God’s blessing, my request was granted. I was so happy to go back to the prison as a perpetually professed member of the Salesians of Don Bosco.”

Anybody who had ever met Brother Paolino was deeply struck by his contagious joy and shining enthusiasm, rooted in a deep friendship with Jesus in the Eucharist and devotion to Mary Help of Christians. Although most (67 years) of his 70 years of religious life he was not able to enjoy the community life, his 'apostolate' of joyful life witness and hardworking life was a living Gospel to many around him. He was friend to both Catholics and non Christians, closely following even the families of his 'guardian angels'.

Indeed his death is a glory to the whole Salesian Congregation: " ... and when it happens that a Salesian dies working for souls, the Congregation has won a great triumph." (Biographical Memoirs of Don Bosco, vol. 17, 273)