Philippines – Care for Creation and young people: thanks to education received, past pupil works for common good 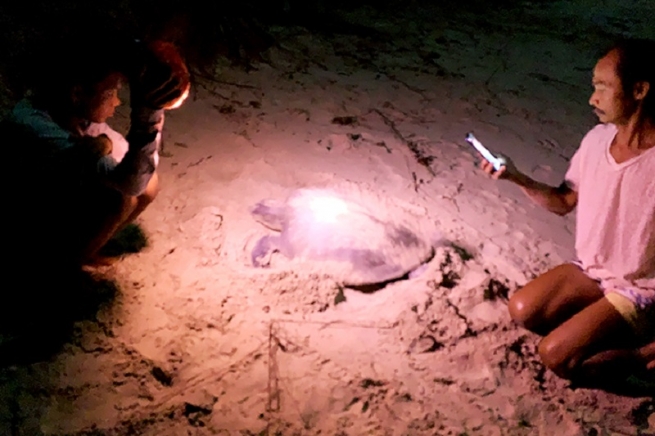 (ANS - Mati) - A young surfer wanders at night on Dahican beach, near Mati, with a torch in his hand and trying to stay unnoticed. He has no bad intentions, quite the opposite: he is there to help make life blossom. He is Winston Plaza, a Salesian past pupil, and if he does this today he owes it to two Salesians.

At around 10:30 in the evening, the shores of Dahican in Mati, Davao Oriental, are bathed in soft moonlight when the rhythmic heartbeat of the waves against the shore were punctured with soft hushes. At one corner of the two-kilometer beach, two people were hunched with lights over a hawksbill sea turtle. The beach is not only known for its waves among the surfing community, it is also known as an ecological hotspot.

Winston Plaza, together with his assistant, has been on the watch since early evening for female turtles who come up to shore to lay their eggs. Around three species of sea turtles nest in Dahican, all of them considered critically endangered by the Department of Environment and Natural Resources (DENR). Winston explains, “only 30% of the people around here like us and what we do.”

Pressed on what he means by that, he explained that despite the headways into environmental protection, some businessmen and locals still see the sea only for its economic value. Winston lamented that too few people see nature and its gifts for its real beauty. The rest only see cash.

Meanwhile, the mother turtle struggled with the sand. “She’s trying to fool us where she hid her eggs,” Winston explained. The turtle had surfaced a few hours back but went back to sea when she encountered people. In the cover of darkness, she went up again to lay her eggs before Winston found her and marked the spot.

Winston belongs to Amihan sa Dahican, a group of local surfers who offer lessons to locals and tourists alike. Along with the other three Plaza brothers, part of their advocacy is the protection of the sea turtles. They hold night watches, even as late as 2:00 in the morning, waiting for the turtles to surface, mark the nest, dig up the newly-laid eggs and transfer them to a safe location where they can be protected from natural and human predators.

They hoped that by controlling the conditions of the nest and fencing, they could hatch more females and increase the survival rate of the eggs. Only 10% of the eggs grow to become adults, he said. Once out of their eggs, the baby turtles are released into the sea to back up their dwindling population.

The group does not only protect baby turtles. Winston explained that they are taking care of some young people too. They help in their education, feed them, and train them in their advocacy. With the persistent opposition, they needed all the help they could get. The group has been working with DENR and has lobbied for legal protection of the coast. All these, he said, was because two priests helped them turn out who they are now.

Fr. Franco Uras and Fr. Leonard Mcmanus were two of the pioneering Salesians in Mati. Winston, together with his brothers Juan, Pedro, and June, were under the care of Salesians. They have been orphaned of their father. Their mother was the Salesian community’s laundry woman. It was the two priests who helped them in their education and taught them the life lessons they now are passing on to the younger generation and the environment.

“They used to bring us to the missions in the chapels. We helped Fr. Uras plant the trees in Don Bosco,” Winston vividly recalled. “Father Mac brought us to Davao so we could study. Father Franco taught my brothers to cook.” Father Franco is a well-known cook and his Italian dishes are cherished by Salesians.

“We do what we do now because the first Salesians in Mati taught us the value of a good education and of contributing to the community and the environment.” After uncovering the eggs, Winston scooped them up with his t-shirt and gently brought them to a fenced area half a kilometer away. He planted them again. “It will take two months before these eggs will hatch,” he hopefully said.

The eggs the Salesians in Mati have incubated years before have long hatched. These now are the warriors who ensure that the next generation of turtles and youth have a future.