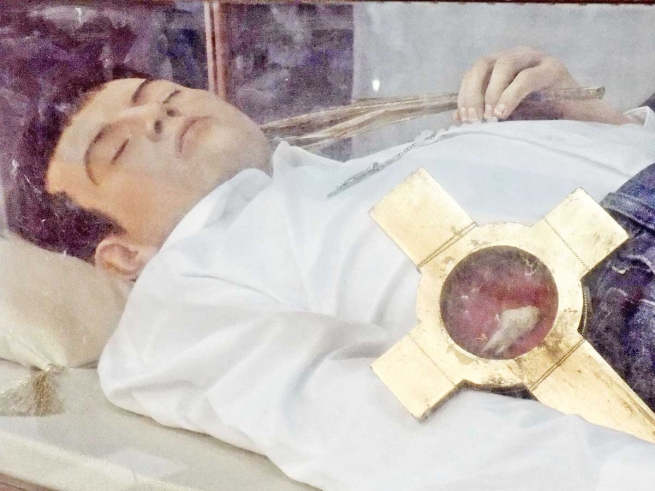 (ANS - Mexico City) – At the end of last month, the Salesian Institute "Ángela Segovia de Serrano", in Barrientos, Mexico City, hosted a distinguished relic of San José Sánchez del Río, martyred at 14 years of age and a model of youthful sainthood for his unshakeable faith and love for Jesus.

Immediately after the arrival of the urn containing the relic of "St. Joselito" – as he is known in Mexico - Fr Lezama, Delegate for Missions and Pastoral Care for the Marginalized of the Mexico-Mexico Province (MEM), presided over a solemn Mass. At the end of the celebration, the words that convinced José's mother to allow him to join the Catholic initiatives in defense of the Christian faith were remembered with emotion: "It has never been easier to earn Heaven as it is now."

A group of Salesian novices - including novices from the Provinces of Central America, Antilles, Haiti, and Mexico-Guadalajara - also participated in the celebration in the company of Fr Héctor Hernández, SDB, of the CAM Province, member of the formation community of the inter-provincial novitiate of Mexico.

On the first day of visits to the relic, marked by different Masses at various times and by moments of public veneration, students, teachers, school staff and parents approached the relic to entrust their prayer intentions to the intercession of the young San José.

On the second and final day of the urn's stopover, Fr Jaime Franco presided over the final Eucharist of the relic's visit to the educational community. At the end of the celebration, all participants paid homage to the young saint and martyr with a loud applause and the exclamation "Long live Christ the King!"

San José Sanchez del Rio was a Mexican teenager and martyr, born in Sahuayo de Morelos, Michoacán state, on March 28, 1913, son of Macario Sánchez and María del Rio. At his young age, he witnessed the persecutions suffered by the Catholic Church in Mexico, which intensified between 1925 and 1929, and which were institutionalized with the promulgation of the so-called "Calles Law" in 1926.

At the age of 14, the brave boy suffered martyrdom, when, after giving his horse to an important Cristero fighter, he was captured, imprisoned, then tortured, forced to walk with skinned feet, stabbed and finally killed with a gunshot for not denying his faith.

Before receiving the fatal blow, he said to his executioner the words he wished to address to his parents: "Long live Christ the King, we will see each other in Heaven". It was February 10, 1928, and a young boy was killed in his village by the authorities of his country.

He was beatified on 20 November 2005 by Pope Benedict XVI and canonized on 16 October 2016 by Pope Francis.