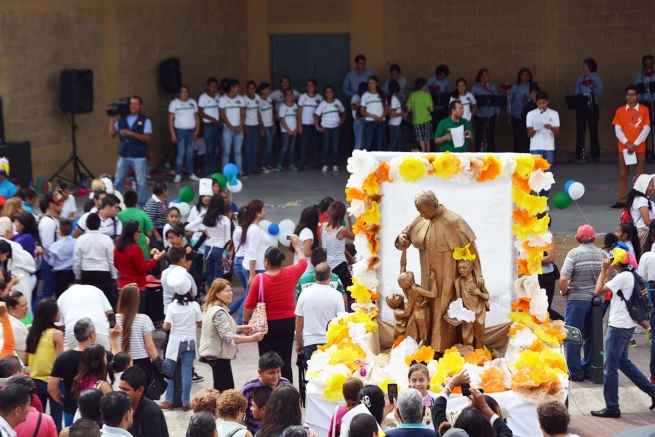 (ANS - Guanajuato) – Starting off from Italy, and passing through more than 130 countries over several years, the relics of Don Bosco have now arrived in Leon, Guanajuato, and will remain there. Youth, children and whole families gathered on Sunday 15 May, the feast of Pentecost, to welcome them.

After the international pilgrimage of the relics of the Saint of Youth, which lasted several years, the Rector Major, Fr Ángel Fernández Artime, decided to donate a relic of Don Bosco permanently to the National Shrine of León, where it can be venerated by the faithful. Although the Salesians have been present in the city for 57 years, the devotion to the Saint of Youth began much earlier. When Fr Renato Ziggiotti, the fifth Successor of Don Bosco, visited Leon in 1956 only the Salesian Cooperators were present in the city. Fr Ziggiotti was surprised by the devotion and affection manifested by the people to Don Bosco and exclaimed: "it is true, in Turin there is the body of Don Bosco, but his heart is here."

To witness the arrival of the relic at the shrine a great number of young people and children gathered, all dressed in black cassock and biretta, the elements that identify the traditional image of Don Bosco. At noon the statue that contains the relic of Don Bosco made its entrance and the Mass began, celebrated by Fr Hugo Orozco, Provincial of Mexico-Guadalajara, and concelebrated by several priests. The Provincial urged the faithful not to focus only on the day of celebration or on the relics, but to remember that "the presence of Don Bosco has to help you to draw close to God."

In 1951 a former seminarian of Vera Cruz called Juvencio Cajiga arrived in León when the Puebla seminary had been closed. He came with the desire to build a temple for Don Bosco and a school for poor children, and he began to build. During this building work he was given a relic of Don Bosco, sent to him by Fr Renato Ziggiotti, then Rector Major. This proved to be "a highpoint and from that day on Leon was called the city of Don Bosco" according to newspaper reports. Since that day, the city has been waiting for the relics of Don Bosco that now, after more than half a century, have come to town.