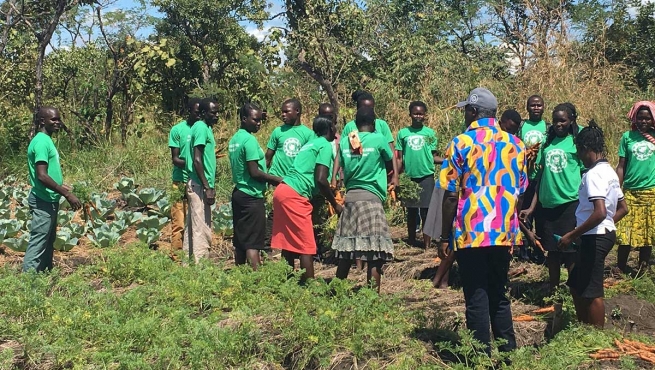 (ANS - Kampala) - The combination of the spread of Covid-19 and the invasion of locusts underway in many countries in eastern Africa is likely to give rise to one of the greatest humanitarian emergencies ever. We've received updates on the situation in Uganda from the Salesian community of Namugongo, at the gates of Kampala, the capital.

It is estimated that 40 million locusts entered Uganda in February, ready to breed at an impressive rate that could multiply up to 500 times until next June.

The parts of the country that are heavily affected are those in the North and East. After government interventions, initially more sporadic and roughshod, then more effective, by drones, it is believed that the damage was circumscribed. But the worst is expected to come in a few weeks with the dry season when the weather will favor the hatching of eggs laid by the locusts in their first foray. Another invasion is expected which could lead the country to famine.

"In Uganda, food is mainly grown in the countryside and transported for sale to urban areas," explain the Salesians of Namugongo. They fear an increase in prices and the inability "to eat a decent meal for those who live on less than a dollar a day."

The Africa Great Lakes Vice Province (AGL) is gathering resources to provide immediate and future support. Fr Elie Nyandwi, Director of the Don Bosco “Children And Life Mission” (CALM) center, explains that the current commitment is to educate farmers on how the soil should be sprayed: “We supply spray equipment and chemicals to integrate the spraying by airplane that the government is doing," to avoid egg maturation.

"In an attempt to avoid a food crisis," adds Fr Elie, "we started storing food that can be preserved, such as rice, cornmeal and cassava." These reserves can be distributed to those affected through the network of parishes and chaplaincies.

There is also the related problem of animal breeding. Locusts eat grasses from pastures, and this will lead to the death of cattle.

And the Salesians are also busy buying seeds and fertilizers to help farmers in the following seasons to produce a good harvest in the next cycle.

Like so many other tragedies, this too could have been at least contained, if not avoided: according to experts, at the beginning of winter, in the deserts of Oman, locusts found the ideal climatic conditions to reproduce, but also had an easy life because between Yemen, in disarray because of the war, and in the Somali region of Puntland, under the threat of al-Shabaab, the extremist Islamist group, no form of possible cooperation as regards counter-measures to contrast the phenomena was reached or put in place.

Here, too, and again, the responsibility of this scourge has been to a large extent in the hands of man committed to dividing and imposing itself with weapons.