South Sudan – Having to stay at home when far from home: coronavirus among displaced persons and refugees 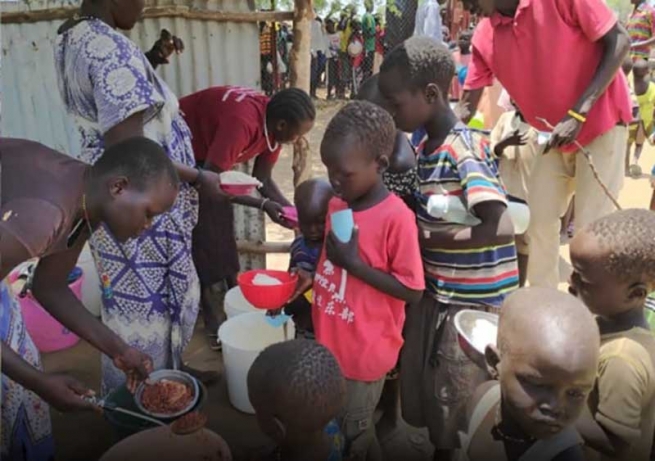 (ANS - Gumbo) - Almost half of the world's population currently lives shut inside their homes to prevent the spread of Covid-19. However, different and numerous groups of people find it extremely difficult to respect this mandatory confinement. Street children, homeless people and those living on a subsistence economy must choose between dying from the virus or starvation. Not only that: there are other groups that are at risk of infection because they are homeless, such as displaced persons and refugees. They left their homes to save their lives and now live in settlements run by missionaries and NGOs.

More than 70 million people in the world fall into this category: they are displaced persons due to violence. Of these, more than 30 million are refugees because they are located abroad, in another country. Everyone hopes that peace will allow them to return home, but many of them live in settlements and refugee camps. And it is very difficult to be in quarantine when you are displaced or a refugee.

Before the spread of the coronavirus pandemic across the globe, the Salesian missionaries taking care of displaced people established measures to prevent contagion. The displaced persons settlement in Gumbo (South Sudan) and the refugee settlement in Palabek (Uganda) are two examples of working with the world's displaced peoples.

The Salesians look after people fleeing the war in South Sudan at all stages of the process: from the emergency, when persons flee - and becomes displaced -; when they cross the border - and becomes refugees -; and also in their reinstatement phase - if they return to their places of origin.

Fr Shyjan, from South Sudan, says that "children are most affected by the closure of schools." Even the ban on gathering to play inside the settlement makes them suffer. "The Salesians of Gumbo, for their part, have decided to "provide a daily meal, distributed by volunteers."

The Salesians also installed water dispensers with chlorine to wash their hands regularly. In the Palabek settlement, the refugees themselves are making masks in the sewing workshops of the Technical School, now closed. "We also try to distribute food to the children," reports missionary Fr Ubaldino Andrade.

While respecting the ban on gathering and celebrating Mass as an assembly, the Salesians continue to guide the IDPs and refugees so that they can raise crops, albeit small. "It is their only means of subsistence, because they have no money," explain the religious.

Everyone hopes that the virus will not reach the most vulnerable population, because otherwise the consequences would be devastating.