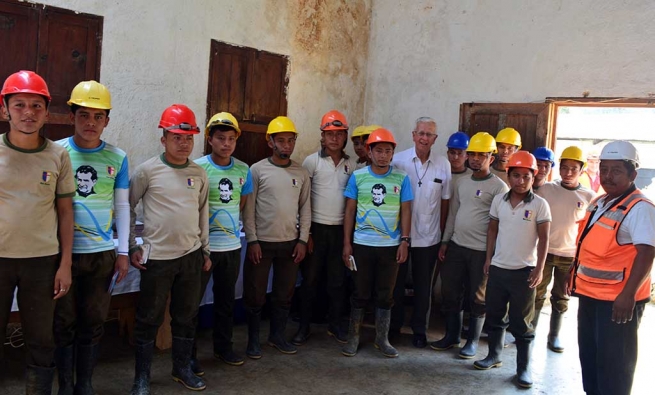 (ANS - Carchá) - San Pedro Carchá - so named in honor of its patron, the apostle Peter - is a municipality in the Alta Verapaz Department in the northern region of Guatemala, where the Salesians first arrived in 1935. Carchá and Chisec are small cities that act as reference poles of a population of circa 270,000 inhabitants, the great majority of the Qeqchí ethnic group, distributed in 433 rural communities. Campur is a Salesian missionary area where works of transformation of the Salesian community have begun which will benefit these small towns.

The Salesian missionaries from Carchá went to Campur, 50 km away, to receive a direct report on the progress of the restructuring of the Salesian presence.

The delegation was received by Fr Anton De Groot, responsible for the impressive work in progress. The team working on this project is made up of the chief engineer, bricklayers and thirty young students from the Don Bosco Center in Carchá. They all accompanied the missionaries in their inspection, explaining what has been done so far and what has been planned.

First of all, there was a deep cleaning action of the grounds to remove weeds and old trees, fence the ground and demolish the crumbling buildings.

The Salesian house itself is acquiring a new use as a parish office and rooms.

Other steps are forthcoming: the raising of the church roof, the replacement of benches with chairs and the reconstruction of the large meeting room. To all this a system for the storage of rainwater is being added.

“In the not too distant future, we're thinking of renting or buying land nearby that has an aquifer. And as a promising dream: the construction of a Don Bosco Center near the church,” say those in charge.

This whole complex project requires a great deal of money. The houses of the Province provide precious monetary resources. The villages, about a hundred, are showing impressive generosity in the face of their poverty. The Don Bosco Center itself provides work to its students who are doing their practical training in masonry, electricity, etc. And yet from its scarce resources it also manages to make generous economic contributions.

Parallel to this enormous construction effort, the "Qeqchí Ministry" is being revitalized with a reorganization and animation of its numerous local leaders and committees.

The soul, mind and heart of this transformative drive is Fr De Groot, who with intelligence, experience and foresight promotes both the structural work and the "Qeqchí Ministry".