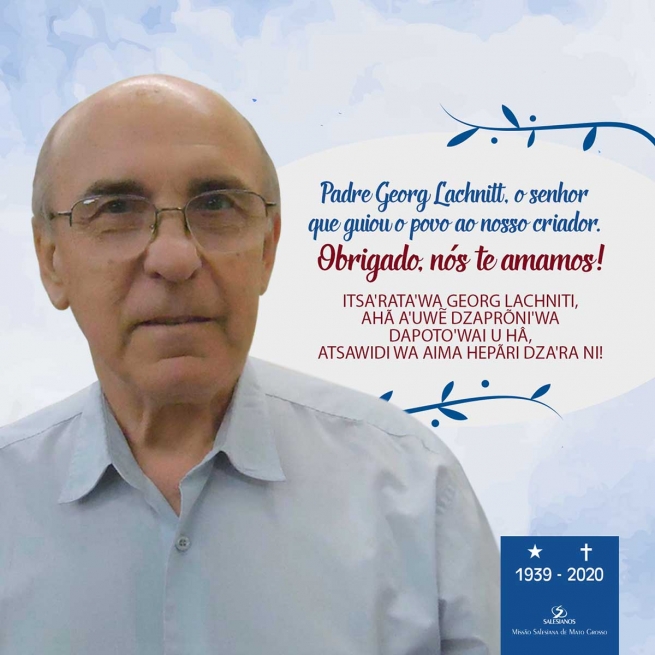 (ANS - Campo Grande) - Yesterday, Monday 20 April, at 1.45 pm, Fr Georg Lachnitt, SDB, left for the Father's house, at 81 years of age, after 62 years of religious life and 52 years of priesthood. “Father Lachnitt was a great Salesian, a zealous priest and a missionary in love with the cause of the Indigenous, to whom he dedicated his life. He was faithful to the Church and the Congregation. We praise God for this,” they say from the Provincial House of Brazil-Campo Grande (BCG).

Fr Lachnitt was born in Markrode, in German Silesia, on April 3, 1939, while Europe was on the eve of World War II. He spent all his childhood suffering the horrors of this scourge and with all his family he also experienced the anguish of deportation and the consequences of a Germany devastated by world conflict. In September 1953, he entered the Salesian aspirantate in Burghausen, southern Germany, where he completed his fundamental studies. He did his novitiate in Ensdorf, Germany, and at the age of 19, he left as a missionary for Brazil, being assigned to the Campo Grande Province. In 1958, while still in the novitiate, he decided to become a missionary together with Fr Rudolf Lunkenbein, today recognized Servant of God.

At the beginning of his life and work in Brazil, he lent service in formation houses, being an excellent pianist. In obedience to the then Provincial, Fr Geraldo Pompeo, he then began to work with the indigenous people of Sangradouro. In this activity, he distinguished himself for having written several books on the Xavante language and culture, producing the first translation of the Roman Missal into the Xavante language.

He organized the Indigenous Documentation Center of the Province and participated in conferences and seminars in Brazil and abroad. He worked on the organization and management of formation courses for pastoral workers of the Xavante ethnic group. He continued to work until the end of last year, stopping only to take care of his health which quickly deteriorated at the beginning of the year.

Until 2019, he had coordinated the Nucleus of Indigenous Projects and Research of the Don Bosco Catholic University (UCDB).

“He spoke of a world and traditions that were not his by nature, but which, once taken on, became almost a second habitat for him. He had a history suffered from birth ... But in his life he cultivated a happy soul and dedicated himself to those he had chosen and whom he had been called to love,” testifies Br. José Gillianno, SDB.

“He was still working on the research of materials and testimonies on the martyrs Fr Lunkenbein and Simão Bororo. Rest in peace, our great missionary, liturgist and friend on the journey with the indigenous peoples,” concludes Sister Silde Coldebela, of the Pious Disciples of the Divine Master.