Peru – "Works are love and not good reasons": being charitable means finding Jesus in the poor 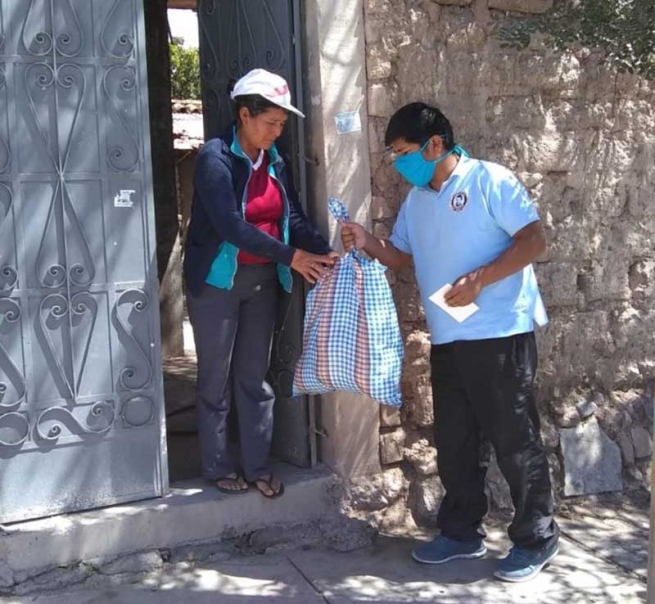 (ANS - Lima) - There is a saying that repeats itself everywhere and returns in circumstances such as the one we are experiencing: "Works are love and not good reasons". In this pandemic period, people have become supportive. Examples abound. Young people are losing fear and looking for a way to help. Doctors, nurses, policemen, people who work in garbage collection are the heroes of our time. But we cannot forget those who continue to build hope every day in the midst of this difficult situation that many families are experiencing. Salesians from all over Peru do charity work for the most needy because "works are love".

In Lima, the capital, with more than 10 million inhabitants, where the main roads are never empty, neither day or night, everything looks like a desert today. The Salesians serve in those areas where need makes young people break the law. A piece of bone can be part of a soup for over 80 kids. In fact, a past pupil donated a large amount of bones to prepare soups.

In Rímac, Lima's oldest area, at the foot of the imposing hill where poverty becomes manifest and where the Salesians are also present, the Don Bosco Foundation's "Emergency Team" is active with the young Salesians of the Rímac house. "I didn't know, nor did I imagine that so many people lived on this hill," said a surprised Mr. Miguel. This is why "the famous cachangas" are prepared with flour and water, put in a pan with a little oil. "And there, on the hill, very close to the sky, we eat bread with them," he adds.

In the Port of Callao, where life is a miracle and where drug trafficking and use, organized crime and prostitution abound, the Salesians have not forgotten the poor. In the so-called "Barrio Frigorifico", with the support of the mothers of the area, they registered the most vulnerable families - Venezuelan migrants, the elderly, children under 13 years - and gave them bags of food to survive for a few days.

In Ayacucho, the city of 33 churches, "the cradle of Liberty in America", the Director of the Salesian house, Fr Domingo Yanqui, and the Salesian past pupils, are doing what they have learned in Salesian classrooms: to be supportive, to work in solidarity. They put on masks and gloves and "bring sacks of food to families who have put a white cloth outside the house, as a sign that they have children and have nothing more to eat," says Alberto, a Salesian past pupil.

If "works are love and not good reasons", nothing could be done if the Salesians of today and yesterday had not impregnated the hearts of the people, not only of solidarity, but above all of "charity": because "to be charitable is to find Jesus himself in the poor ", as Pope Francis says.