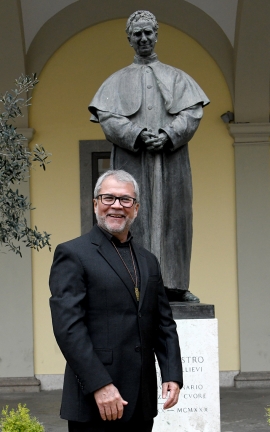 (ANS - Rome) - On Monday 4 May, the Rector Major, Fr Ángel Fernández Artime, with the consensus of the General Council, appointed Fr Filiberto González as Provincial of the Mexico-Guadalajara Province (MEG) for the 2020-2026 term. Fr González has just concluded two terms as General Councilor for Social Communication - from 27 March 2008 to 12 March 2020 – hard work that led him to organize and imagine the future of communication in the Congregation and at the service of young people.

The news was communicated through a letter addressed to Fr Hugo Orozco Sánchez, Regional Councilor for Interamerica, to the Salesians of the Province.

Fr González, Mexican, was born in Milpillas, a town belonging to the municipality of Tepatitlán, in the state of Jalisco, on August 22, 1954. He attended the novitiate in Chulavista and made his first profession in Guadalajara on 1 October 1974, and perpetual profession on September 28, 1980. He became a deacon on 13 November 1981 and was ordained a priest on December 11, 1982.

During his Salesian life, he was Master of Novices, head of Youth Ministry, a student of Social Communication (ISCOS - Rome), formator of post-novices in Huipulco (1993), Provincial Delegate for Youth Ministry. In 2006, he was appointed Provincial of the Salesians of Mexico-Guadalajara, carrying out this task until 2008. GC26 (2008) elected him Councilor for Social Communication of the Salesian Congregation, a position confirmed by GC27 (2014).

In recent years Fr González has designed, developed and implemented projects in the field of Social Communication, offering the Salesian Congregation a communication proposal according to "digital" and "eminently virtual" times. In an interview, he made the words of Don Bosco his own on the sharing of good books and on the communication proposal in the mission: “I invite you not to neglect this very important part of our mission." In these twelve years, in fact, the communication of the Salesian congregation has been guided by a person who believes with passion "if today the break between the Gospel and culture is intensified due to superficial communication, we must collaborate in favor of an educational force that forges a mentality and creates culture, like an authentic alternative school.”

The communication proposal of Fr González had two highlighted features: that communication must shape the mentality so as not to be superficial, and that true communication creates an alternative school of formation and life. Two legacies that time and history will confirm.

"I accept the position with great trust in God, in my confreres, in the Rector Major and his Council, and with total gratitude to God who entrusted me with this service to my brothers and young people from the Guadalajara Province. Many things will change in the climate of Covid-19, but I hope that our fidelity to God, to Don Bosco, to Mary and to the young people will remain unchanged" were the first words of Fr González.