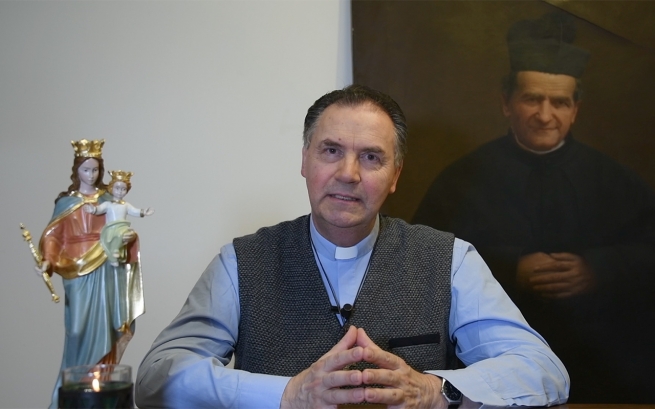 (ANS - Rome) - On 8 May 2020, the Rector Major, Fr Ángel Fernández Artime, and the Councilors concluded the General Council's work sessions with a group of Councilors physically present in the Rome office and others present online from Vietnam, Mexico, Brazil and Spain. "At the beginning of the sessions of the First General Council of the year 2020 with the new Councilors, we held ordinary administration meetings," said the Rector Major. "Firstly, we completed ongoing formation under the guidance of Fr Stefano Vanoli, Secretary, and Fr Pier Fausto Frisoli on juridical questions and on the Vademecum of the General Council."

The following seven provincials were appointed during this council:

Subsequently, the Rector Major communicated the offices of several confreres who have been part of the Rome headquarters for the past six years. The Rector Major appointed Fr Guillermo Basañes and Fr Václav Klement as Extraordinary Visitors 'ad nutum' for an unspecified period of time.

Fr Fabio Attard is responsible for Ongoing Formation of the Salesians and lay people in Europe, part of the National Center for Youth Ministry of the Conference of the Salesian Provinces of Italy (CISI) and will answer directly to the Rector Major.

The Rector Major also made public the appointment of Fr Joan Lluis Playá as World Delegate of the Rector Major for the Salesian Family. Fr Playá will continue his work as Spiritual Assistant of the Don Bosco Volunteers (VDB) and of the Volunteers with Don Bosco (CDB).

At the end of the Good Night, the Rector Major thanked Fr Francesco Cereda for his work as Vicar, explaining that he will return to his Lombard Emilian Province. Fr Timothy Ploch will also return to his home province in the United States; Fr Raphael Jayapalan, former World Delegate of the Past Pupils of Don Bosco, will leave as a missionary in Sri Lanka; Fr Américo Chaquisse will enjoy a period of ongoing formation, while Fr Tadeusz Rozmus will for the moment be sent by the Rector Major to Zurich to meet the Salesian community and the local bishop in order to study a future development of the Salesian presence.

"The Congregation is large, has enormous vitality and it is the Salesians and lay people who animate this great work that do real good for thousands and thousands of young people," concluded the Rector Major.